Despite the Pentagon’s mandate, 12,000 Air Force members have refused to get a COVID-19 vaccine.

There is no time left for active duty service members to be fully vaccinated by the Nov. 2 deadline. Air National Guard and Air Force Reserve personnel have until Dec. 2 to get vaccinated.

“We don’t anticipate we will be to a 100% vaccination rate,” Rose Riley of Air Force public affairs told Defense One on Oct. 27.

This is the first major challenge military leadership faces regarding vaccines since the mandate was issued in August.

Air Force data indicated that about 96% of active-duty airmen are at least partially vaccinated.

Airmen who do not receive a medical or religious exemption can be punished under Article 92 of the Uniform Code of Military Justice. This could include administrative paperwork, a court-martial charge, or possible dismissal from service.

“Nearly 40 recruits in the Air Force training pipeline were recently forced out for refusing to get vaccinated,” according to The Washington Post. “They were sent home using a discharge method to easily banish recruits who fail to meet standards before officially entering the military.”

Secretary of the Air Force Frank Kendall thanked the service members who had complied with the branch’s vaccine deadline in a statement.

“To those yet to get vaccinated,” he added, “the order is clear: You have a responsibility to take action now, protect our nation and those we love, or be held accountable for failing to do so.”

Pentagon spokesperson John Kirby told the media this week that there have been very few religious exemptions.

Kirby also said that while almost 87% of active-duty troops are fully vaccinated, hesitancy among military reservists and National Guard members drives lowered the military total. The cumulative vaccination rate for the entire military is about 68%.

Because of President Biden’s Sept. 9 Executive Order, all Air Force civilian employees have to be fully vaccinated by Nov. 22, and contractors by Dec. 8. 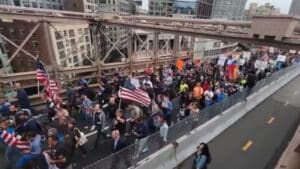