“This will be a death sentence for some,” said Andrew Ansbro, president of the Uniformed Firefighters Association.

“I think it’s extraordinarily short sighted to take people he just had a ticker tape parade for a few short months ago and cast them aside,” added retired FDNY member Kieran Burke.

This will be our future if the Biden mandates are allowed to continue.

“I’m assuming it’s related to people expressing their views on this new mandate,” Mayor Bill de Blasio said during Thursday’s protest. “You want to protest, go protest. But when you’re on the clock, you have to do your job.”

Latest records show 28% of the NYPD remains unvaccinated, a percentage that’s even higher for the FDNY.

The official deadline for public employees to receive their first injection is 5PM Friday, but NYPD Commissioner Dermot Shea will give police officers the weekend to get vaccinated. 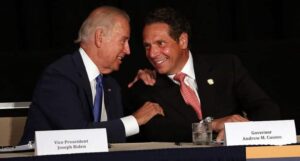