The American Booksellers Association (ABA) apologized for accidentally promoting conservative authors and vowed to prevent the mistake from happening again.

The 121-year-old trade association describes itself as “a national not-for-profit trade organization that works to help independently owned bookstores grow and succeed.” As part of its services, the organization mails lists of copies of books it recommends store owners to stock.

Employees organizing these recommendations in July mistook Candace Owens’ best-selling book, Blackout: How Black America Can Make Its Second Escape from the Democrat Plantation for a social-justice-themed teen romance titled Blackout. They sent out a cover image of Owens’ book to approximately 750 stores. The group also mailed out hundreds of publicity copies of Abigail Shrier’s Irreversible Damage, which scrutinizes the gender transition trend among teen girls, as part of a publicity box mailing.

Activist and left-leaning bookshop owners were outraged when they received the mailer.

ABA CEO Allison Hill apologized in a statement and said the employees involved were “very committed to vigilance going forward” and would undergo procedural and diversity, equity, and inclusion training.

ABA’s Diversity, Equity, and Inclusion Committee held an official inquiry into the episode and reviewed all ABA procedures and programs.

Of the Blackout mix-up, Hill said, “It was a terrible mistake with terrible racist implications. However, based on our investigation and the demonstrated diversity, equity, and inclusion (DEI) commitment of these individuals, we have no reason to believe the action was malicious in intention.”

As part of its new checks and balances, Hill said that ABA would be “conveying our expectation to publishers that books submitted for the mailing adhere to our equity and inclusion policy.”

According to National Review, under ABA’s new review process, a team and senior staff members will use “the United Nations’ criteria for hate speech ” to decide if a book is problematic.

“The U.N.’s definition of hate speech is ‘any kind of communication in speech, writing, or behaviour that attacks or uses pejorative or discriminatory language with reference to a person or a group on the basis of who they are,’” notes National Review.

Candace Owen confirmed to her Twitter followers that ABA’s CEO had called her autobiographical book racist and then requested a public apology.

I am calling for a public apology from @ABAbook and Allison Hill. It is an act of unspeakable, explicit racism for a white woman to send around an e-mail slandering and denigrating an autobiographical book from a black woman who came from nothing.
We cannot accept this racism. https://t.co/0aCk47Xbvd 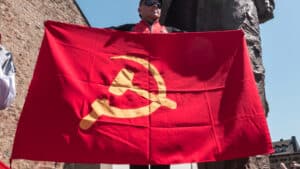 BACK TO THE USSR: Poll Shows Majority of Registered Dems Prefer Socialism to Capitalism