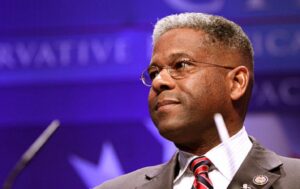 Allen West announced on July 4th that he will challenge incumbent Governor Greg Abbott in the Texas GOP Primary.

West, who served as the state party chair from 2020 until last month, was elected to Congress from Florida in 2010 — during the height of the Tea Party movement. He lost reelection in 2012 and suggested fraud and ballot tampering had caused his defeat.

The Dallas Morning News reports “in 2015, West was hired as chief executive officer of the Dallas-based National Center for Policy Analysis, a free market think tank credited with hatching such GOP policy advances as Health Savings Accounts and Roth IRAs. In less than two years, the nonprofit was bankrupt. A chief financial officer hired during West’s tenure embezzled more than $600,000, and the board ended up accusing West of mismanagement.”

Reportedly, West considered challenging Senator Marco Rubio in 2016 but ultimately decided against it. 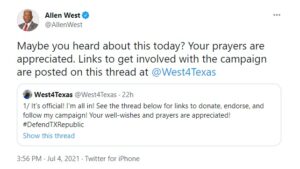 The retired Army Officer has been critical of Governor Abbott. He has even joined protesters at the Open Texas Rally in front of the Governor’s mansion decrying coronavirus policies and restrictions.

“In September, West and others escalated their feud with Abbott by filing a lawsuit straight to the Texas Supreme Court looking to stop the governor’s six-day extension of early voting. They argue Abbott was not authorized to do so without input from the state Legislature, which is out of session this year and won’t meet again until January,” KXAN wrote at the time.

Speaking at the Sojourn Church in Carrolton, Texas, West invoked his faith and his patriotism saying “Let’s stand up for God, for country and for Texas” after announcing his intention to enter the race.

In a video posted to his Twitter page after the service, West pledged to fight against the ‘Green New Deal,’ to secure the southern border, and to address human sex trafficking in Texas.

He is, by all accounts, in for a tough fight.

“Republican Gov. Greg Abbott, who is up for a third term and may also be eyeing a 2024 presidential bid, has already locked up the endorsement of Donald Trump — whose voters West would need to have any shot at winning a GOP primary in Texas,” said AP News.

Abbott is known for his fundraising abilities. Even with concerns over his handling of COVID-19 restrictions, he already had over $40 million raised at the start of the year.

In addition to West, Senator Don Huffines and Blaze TV host Chad Prather have announced plans to challenge Abbott in 2022. 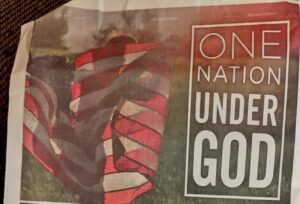