A 50-foot tall, American-themed Christmas tree was damaged after being set on fire in Midtown Manhattan.

The All-American Tree is the third annual display outside of Fox New’s New York headquarters on Sixth Avenue and 48th Street.

“The red, white and blue-themed tree was 50 feet high, decorated with 10,000 glass ornaments and 100,000 lights,” reports Fox News “It took workers 21 hours to assemble the decorations.”

The Christmas tree outside of Fox News has caught on fire. pic.twitter.com/No7SVK0JeF

When police arrived, Craig Tamanaha was running from the scene. The 49-year-old was taken into custody and firefighters stopped the blaze.

He is charged with criminal mischief, reckless endangerment and arson.

According to reports, Tamanaha is homeless and did not resist arrest. Eyewitnesses say he climbed halfway up the tree to maneuver around the metal structure and then went under the tree carrying an armful of newspapers.

The NYPD has not specified a motive and they are presently unsure of what accelerant the man used.

In an update on the incident, “Fox & Friends” co-host Brian Kilmeade said, “The cops came from everywhere. Our security guys are fantastic. They were able to jump right on him. A lot of retired detectives,”

He added that the fire “is beyond tragic and angers everybody. And that smoke, by the way, filled up our entire lobby.”

“It’s beginning to look a lot like arson,” added his co-host, Steve Doocy.

The tree was unveiled on Dec. 5. The media company has said it will be rebuilt later this month. 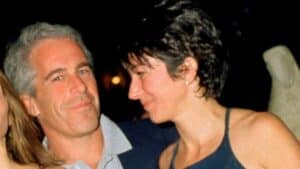 A Third Witness Tells How Epstein and Maxwell Abused Her