Attorney General Merrick Garland announced the nine people who will assist in the review of the mass shooting at Robb Elementary School.

The critical incident review will evaluate law enforcement’s response to the violent day where a single 18-year-old gunman killed 21 people, including 19 students.

“We will be assessing what happened that day,” said Garland at the team’s first meeting on June 8. “We will be doing site visits to the school, we will be conducting interviews of an extremely wide variety of stakeholders, witnesses, families, law enforcement, government officials, school officials, and we will be reviewing the resources that were made available in the aftermath.”

Other members of the team include Frank Fernandez, a past director of public safety in Coral Gables, Florida; Albert Guarnieri, a unit chief at the FBI; Laura McElroy, the CEO of McElroy Media Group; and April Naturale, an assistant vice president at Vibrant Emotional Health.

“We have been promised, assured and welcomed with respect to cooperation at every level of law enforcement: state, federal and local,” the attorney general added.

Overseen by the Office of Community Oriented Policing Services, the D.O.J. says the team will evaluate “police policies, training and communication, along with the deployment of officers and tactics” as well as “who was in command of the incident and how police prepared for potential active-shooter incidents.”

Garland has vowed the independent review will be transparent and be released to the public when completed. Mayor of Uvalde, Don McLaughlin, requested the review.

Law enforcement has faced intense backlash after the shooting following the revelation that officers waited outside of the elementary school for about an hour after arriving on the scene.

Salvador Ramos, the gunman, passed the school security officer off-campus while en route to Robb Elementary. Ramos ultimately spent an estimated 80 minutes inside the building after entering through an unlocked door.

Parents who arrived at the scene after hearing reports of the shooting were prevented from entering the building by law enforcement. In some instances, parents were arrested or tased.

The D.O.J. conducted similar reviews after other mass shootings, including those in San Bernardino, California, and Orlando, Florida.

“Nothing that these [investigators] can do can undo the terrible tragedy that occurred, and that we are just heartbroken about,” Garland added during his statement in Washington D.C. “But we can assess what happened and we can make recommendations for the future.” 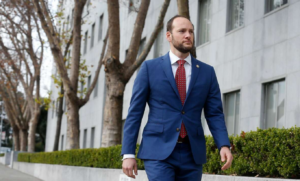