‘Our strongest concern is if we offended members of the LGBTQ Community with this campaign,’ the agency said

The advertising agency that created the Pride Whopper campaign for Burger King has apologized.

During the month of June, locations of the fast-food chain in Austria planned to serve the signature item with either two top or two bottom buns as a symbolic display of support for LGBT people.

“We at JvM Donau are proud of our queer community within our agency. Unfortunately, we still messed up and didn’t check well enough with community members on different interpretations of the Pride Whopper,” Jung von Matt Donau, the Austrian agency, said in a statement on LinkedIn.

“The intended message of the Pride Whopper was to spread equal love and equal rights,” the agency added. “Our strongest concern is if we offended members of the LGBTQ Community with this campaign. If this is the case, we truly apologize.”

“We’ve learned our lessons and will include experts on communicating with the LGBTQ community for future work as promoting equal love and equal rights will still be a priority for us,” LVM Donau concluded.

Burger King Austria has not released a statement regarding the Whopper.

The campaign was not well received online: some opposed potential sexual innuendo while others found the ploy degrading to the gay community.

Burger King Austria made a Pride burger that’s either two tops or two bottoms… what in straight hell? pic.twitter.com/bSl3Cyiq9p

Burger King has introduced a new "Pride Whopper" where you can order it with two tops or two bottoms of buns.

What a strange advertisement. I'll take my Whopper with a regular bun because ordering fast food doesn't need to be a political statement for me. pic.twitter.com/eE7fiQCTv5

If they spent any time talking to the queer community Burger King would know the last thing they want is pairing a top with a top and a bottom with a bottom https://t.co/VE0qELkDun

If they spent any time talking to the queer community Burger King would know the last thing they want is pairing a top with a top and a bottom with a bottom https://t.co/VE0qELkDun

The original promotional American ad describes the bun as “equal” and included the tag line “Time to be proud.” The ‘E’ in Whopper was made into an LGBT flag.

“We stand for the equal rights of all identities and sexual orientations,” read a message on the Burger King Austria’s website.

“The company partnered with sexual health and wellness expert Dr. Evan Goldstein to develop the menu and comedian Rob Anderson, who narrates the ad,” reports Fox News. “A ‘bottom’ refers to someone who engages in certain sexual positions.”

You shouldn't miss a good meal for a good time. That’s why this Pride, we've teamed up with @DrEvanGoldstein and @smartthrob to create the world’s first Bottom-Friendly Menu (yup, it’s real). #EatWithPride pic.twitter.com/03Fm8YJlAP

Other unpopular Pide Month promotional Material includes a tweet from the United States Marine Corps, which share an image of a helmet decorated with rainbow bullets, and Vaseline, which released a limited edition rainbow tin.

Throughout June, the USMC takes #Pride in recognizing and honoring the contributions of our LGBTQ service members. We remain committed to fostering an environment free from discrimination, and defend the values of treating all equally, with dignity and respect.#PrideMonth #USMC pic.twitter.com/MOyvFmyJiB 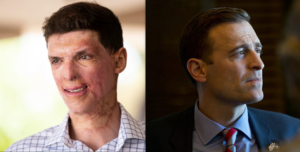