More than 200 students were involved, according to the district’s superintendent

A public school in Oakdale, California, barricaded students into a gym for not complying with mask mandates.

Staff members at a high school in the Oakdale Joint Unified School District barricaded gym doors with tables to keep the maskless students inside.

A staff member was reportedly caught turning down the thermostat in an effort to “freeze them out.”

The incident was the day after hundreds of demonstrations protesting Governor Gavin Newsom’s mask mandates were reported across the state. California parents and students have expressed indignation after photos of Newsom attending an LA Rams football game without a mask circulated online.

OJUSD superintendent Dave Kline said in a statement that on Feb. 3 about 200 students in the OJUSD went to school without a mask. The students, who were in various grades, were sent to the gym and told to independently work on schoolwork.

“I respect their right to protest. However, we’re under a state mandate and the state mandate carries the force of law,” Kline said following the incident.

Update: Confirmed staff attempted to barricade the maskless high schoolers in the gym by putting tables in front of the exits. A staff member also was caught turning down the thermostat to “freeze them out.” Here is one of the photos taken by a student. pic.twitter.com/SckZIG5Tm0

When they were eventually let out of the gym, the students marched to the district headquarters in protest.

After later “escaping” the freezing gym, the kids marched to the district headquarters in protest. pic.twitter.com/Mz95ySlOTR

The day before, a maskless student at Fair Oaks Elementary School in Oakdale was made to do his schoolwork outside after his mother refused to pick him up when the school asked.

“I said, ‘No. It is your job to educate my son, and he has every right to be there,” said Jennifer Poth, the 8-year-old boy’s mother. “They forced him to go outside in 43-degree weather and sit there and try to do schoolwork.”

Kline called the incident a “mistake” in a comment to KCRA.

“That was a miscalculation on my part, and I took responsibility for that,” Kline said. “I apologize to both parents that that took place. That is not how we want to treat our students. We still want to be respectful.”

He added that if he violates California’s mask mandate by not requiring students to wear masks then he risks the “well-being” of the district.

The OJUSD students’ experiences do not seem to have stopped further anti-mask demonstrations.

Reopen Californian Schools, a group formed by families in the state who advocate for parents’ right to be involved in their children’s education, shared other videos and photos of students refusing to wear masks in protest of the mandates on Feb. 4. 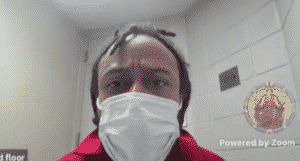