Darrell Brooks Jr., the man accused of driving his car into a Christmas parade in Waukesha, Wisconsin, made his first court appearance on separate witness intimidation charges.

Bail was set on Feb. 2 in a witness intimidation case in Milwaukee County.

Brooks is accused of calling the victim of a domestic violence case more than a dozen times from jail. At least 14 were classified as intimidating.

“He has eight prior criminal convictions in Wisconsin, at least one out-of-state, at the time of these offenses if they are proven to be true. He had two open cases in Milwaukee County,” said prosecutor Matthew Torbenson. “He has demonstrated, through his conduct, if these allegations prove to be true, that he commits crimes whether he’s in custody or out of custody.”

In addition to bail set in a second Milwaukee County case, Brooks’s total bail charges in the county are over $250,000.

Brooks is also being held on a $5 million bail in Waukesha County for charges relating to the parade attack. That county has also set a bail of $200,000 stemming from Brook’s domestic violence charges for running over his child’s mother.

A defense attorney for Brooks argued that the latest Milwaukee bail was unnecessary given the bail set in Waukesha.

“His circumstances are not changing anytime soon – on one hand this is a moot argument because he’s not going anywhere,” attorney Robert Hampton said in court.

The judge ruled in favor of the prosecution and ordered bail be set at $50,000.

In total, nearly $5.5 million in bail charges have been brought against him in the state of Wisconsin.

He is accused of driving his red SUV into the parade on Nov. 21, injuring at least 62 people and killing 6 others.

Video footage of the scene was posted to Twitter where Brooks was subsequently identified via a YouTube rap video.

Brooks has a documented criminal history in several states in addition to Wisconsin.

“According to records, Brooks had another pending assault case from July 2020 — in which he was released in March when his $7,500 bail was dropped to just $500 — and has an open sex assault warrant in Nevada,” reports The New York Post.

Just before the incident at the parade, police were called to a domestic violence situation at his girlfriend’s home after neighbors saw her escaping Brooks barefoot and with a black eye. He left for the parade before the police arrived.

He cried when he appeared in court on Nov. 23. For his witness intimidation case, he appeared via Zoom. He is currently being held at the Waukesha County Jail. 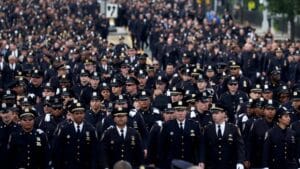