Less than 90% of the state's votes are expected in

The results initially showed Cortez Masto in the lead on Election Night until approximately 4:00 AM EST on Nov. 9. With 73% of the vote reported, the results began to tilt in Laxalt’s favor.

Shortages of election workers and problems with paper ballots in Clark County and Washoe County have added to result delays, leaving one of the major senatorial races undecided days after Election Day.

Cortez Masto is seeking her second term in the Senate. A vocal supporter of abortion access, she was endorsed by Planned Parenthood Action Fund, the organization’s political arm, as well as EMILY’s List, the Democratic PAC that backs female candidates who advocate for abortion access. The senator also promised to support policies that open pathways to citizenship for illegal immigrants who arrived as minors.

Cortez Masto planned to run a full-page advertisement in seven state publications, including the Las Vegas Review-Journal, the Reno Gazette-Journal, and the Las Vegas Weekly, featuring an endorsement letter signed by 14 members of Laxalt’s family. She was joined at a rally by former President Barack Obama. Cortez Masto declined to campaign with current President Joe Biden despite her husband’s close relationship with Hunter Biden, notes Breitbart.

The San Deigo Union-Tribune notes that both candidates “come from powerful political families.”

“Laxalt’s grandfather was former Nevada governor and U.S. Senator Paul Laxalt, and his father was former U.S. Sen. Pete Domenici from New Mexico,” reports the outlet. “Cortez Masto’s father Manny Cortez served as a member of the Clark County Commission and was the longtime head of the Las Vegas Convention and Visitors Authority, a government tourism agency led by a board made up of private resort industry members and local government officials.”

Polls indicated that Laxalt was viewed favorably by the majority of voters.

He focused his campaign on rising inflation and illegal immigration. He has vowed to “finish the wall” at the US-Mexico border and support the “remain in Mexico” policy.

In September, Laxalt called Nevada “ground zero for the national inflation crisis” after data from the U.S. Congress Joint Economic Committee showed 15.6% inflation in the state.

“In every corner of our state, hardworking families are being crushed by a 15.6 percent inflation rate and some of the highest gas prices in the country. I speak with Nevadans every day who tell me they are being forced to cut back at the grocery store, skimp on back-to-school supplies for their kids, or even run up their credit card debt just to fill up their cars,” he said in a statement. “This heartbreaking economic crisis is a direct result of President Biden’s and Senator Cortez Masto’s reckless decision to pump trillions of dollars into an already overheated economy.”

Laxalt went on a 1,100-mile bus tour of the rural counties of the state to court voters during the competitive lead-up to Election Day.

President Donald Trump gave Laxalt his “complete and total endorsement”  in August of 2021.

“Adam Laxalt is running for Senate in Nevada to defeat Harry Reid’s, Chuck Schumer’s, and Nancy Pelosi’s handpicked successor, and win an America First majority in the U.S. Senate,” said Trump. “He fought valiantly against the Election Fraud, which took place in Nevada. He is strong on Secure Borders and defending America against the Radical Left.”

Republicans have secured one of Nevada’s four seats in the House of Representatives, while Democrats have won two. 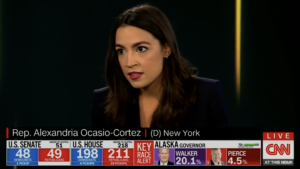 AOC Claims Her Life Is 'In Danger' Since Elected To Congress