Former TV star Jussie Smollett took the stand on Dec. 6 in a trial where he is accused of lying to police after staging a fake hate crime.

Smollett, who appeared in the show Empire for several seasons, is charged with six felony counts of disorderly conduct. He could be imprisoned for three years for each count.

Last week, brothers Abimbola and Olabingo Osundairo testified that the actor paid them $3,500 to help him stage an attack. They said he gave them $100 for supplies, told them to put a noose around his neck and yell homophobic slurs.

On Jan. 29, 2019, Smollett called the police to report he had been attacked while walking to his Chicago apartment. He described the attack, including the noose and homophobic slurs, and said the perpetrators yelled “this is MAGA country” during the attack. He also said the two men poured an “unknown chemical substance” on him.

While on the stand, Smollett told the jury he met Abimbola Osundairo in 2017  at a club, where he learned he also worked on the TV show Empire. He said the two consumed narcotics and then went to a bathhouse and made out.

To explain why his car was filmed picking up Abimbola, Smollett said he regularly drove with the man because they smoked marijuana together. Prosecutors have argued that this was really a “dry run” of the planned attack.

Abimbola denied having any kind of romantic relationship with the actor.

The second brother, Olabingo, “didn’t like me or he wasn’t feeling me,” said Smollett during his testimony.

He also talked about his childhood, as one of six siblings who began acting like a child. Smollett, who is gay and black, talked about his involvement in charity organizations and his work to prevent AIDS in the African American community. He said he auditioned for the role of a gay singer on Empire because he had never seen a similar character portrayed on TV.

“Prosecutors say Smollett staged the attack because he was unhappy with the Empire studio’s response to hate mail he received,” reports AP News. “The letter including a drawing of a stick figure hanging by a noose, with a gun pointed at it, and the word ‘MAGA’ — an apparent reference to then-President Donald Trump’s slogan, ‘Make America Great Again.’”

“Chicago Police Detective Michael Theis testified that police spent more than 3,000 combined hours investigating Smollett’s report, and said Smollett had not cooperated with some of the investigation,” per CBS News.

Smollett’s lawyers made several accusations as part of their defense strategy. They have said Chicago police rushed to the conclusion that the attack was a hate crime, that there could have been a third person who was involved and that the Osundairo brothers attacked Smollett because Olabingo is homophobic. 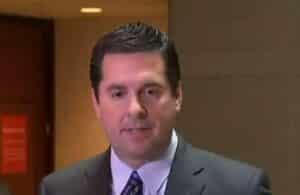 Rep. Devin Nunes Announces He is Resigning Before the End of His Term to Join Trump Media Firm