ACLU Warning In 2008: Suspension Of Liberty For Public Health Could Be Permanent

A recently surfaced 2008 report from the American Civil Liberties Union (ACLU) examined how the United States might respond to a pandemic and warned against “law enforcement and national security-oriented measures” that cause “freedom and the rule of law [to be] permanently suspended.”

“The threat of a new pandemic will never subside. But the notion that we need to ‘trade liberty for security’ is misguided and dangerous,” the ACLU warned. “Public health concerns cannot be addressed with law enforcement or national security tools. If we allow the fear associated with a potential outbreak to justify the suspension of liberties in the name of public health, we risk not only undermining our fundamental rights, but alienating the very communities and individuals that are in need of help and thereby fomenting the spread of disease.”

The ACLU’s warning that the “suspension of liberties in the name of public health” could alienate individuals appears to be representative in the current COVID-19 vaccine hesitancy – with a recent poll finding 20% of Americans would either definitely refuse the vaccine or only agree to be vaccinated if they were required by their job or school.

Seemingly forecasting the ongoing calls for lockdowns as new variants of COVID-19 continue to be discovered, the ACLU wrote, “The law enforcement approach to public health offers a rationale for the endless suspension of civil liberties. The ‘Global War on Terror’ may go on for a generation, but the war on disease will continue until the end of the human race. There will always be a new disease, always the threat of a new pandemic. If that fear justifies the suspension of liberties and the institution of an emergency state, then freedom and the rule of law will be permanently suspended.”

After analyzing America’s historical response to disease outbreaks, the ACLU concluded, “Highly discriminatory and forcible vaccination and quarantine measures adopted in response to outbreaks of the plague and smallpox over the past century have consistently accelerated rather than slowed the spread of disease, while fomenting public distrust and, in some cases, riots.” 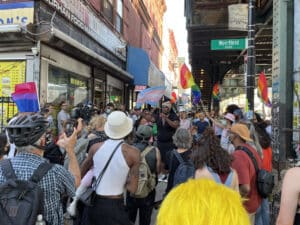 2 responses to “ACLU Warning In 2008: Suspension Of Liberty For Public Health Could Be Permanent”