$2.4 Million In Methamphetamine Seized By Customs And Border Protection

Members of the Progreso Port of Entry seized 175 pounds of liquid methamphetamine from a passenger vehicle attempting to enter the United States at one of the southernmost border crossings in Texas.

According to a statement from CBP on the seizure, an officer spotted a suspicious 1998 Ford Expedition that was driven by an American citizen and referred the vehicle for a secondary inspection.

After conducting a thorough secondary examination, which included utilization of non-intrusive inspection (NII) equipment, CBP officers discovered a total of nearly 175 pounds (79.38 kg) of alleged liquid methamphetamine within the gas tank. The methamphetamine had an estimated street value of $2.4 million.

Since the start of fiscal year 2022, Customs and Border Protection has seized over a half-million pounds of narcotics at the border including over 10,000 pounds of fentanyl. At the Laredo Field Office, which has jurisdiction over the methamphetamine bust, over 1,500 pounds of meth have been seized in the last week alone.

CBP agents and officers have seized more than 552,000lbs of drugs nationwide during FY22 through the end of July.

Filter by location, type, and component on our stats page: https://t.co/nw8Es5LJsP pic.twitter.com/zbd2KLPzGb

In another bust that took place along the Texas border, a quarter-million in undeclared dollars and two handguns were seized from a vehicle that was heading into Mexico.

“This seizure of a significant amount of outbound currency and weapons illustrates CBP’s commitment to our priority border security mission and cooperative work with partner law enforcement agencies to ensure consequence delivery, whether at the state or federal level,” Flores said.

A female Mexican national, who was in possession of the firearms and currency, was turned over to the Webb county sheriff’s office for state currency and weapons charges. According to CBP, individuals can carry any amount of currency across the border but, “if the quantity is more than $10,000, they will need to report it to CBP.” 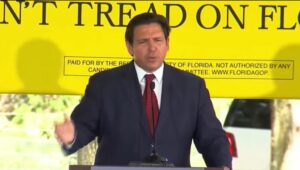 DeSantis On Fauci: 'Someone Needs To Chuck That Little Elf Across The Potomac'