YouTube claimed in a press release that they pulled the videos “after careful review” and that his presidency and politics had nothing to do with the decision.

“Our rules do not allow content that states that hydroxychloroquine and/or ivermectin are effective in treating or preventing COVID-19, that states there is a cure for the disease, or says that masks do not work to prevent the spread of the virus,” the statement from the tech giant asserted.

“Bolsonaro’s YouTube channel plays host to his weekly national addresses, which are folksy, musical events in which he invites on ministers, takes questions from viewers and blasts his enemies,” Reuters reports. “During the chats, which also go out on his Facebook page, he regularly expounds on his doubts about the severity of the virus, the foolishness of stay-at-home measures and the wonders of unproven drugs like hydroxychloroquine.”

Bolsonaro has been fined multiple times for not wearing masks and has been outspoken about his concerns with the vaccines.

“In the Pfizer contract it’s very clear: ‘we’re not responsible for any side effects.’ If you turn into a crocodile, it’s your problem,” Bolsonaro said in December, the AFP reports.

The right wing populist, who is often referred to as the “Trump of the tropics,” has also expressed concern about the danger of lockdowns while much of the nation is living in or near poverty.

“Many governors have closed everything. They have destroyed jobs, especially informal ones. We have around 38 million people in Brazil who live from day to day, who work in the morning to eat at night,” he said earlier this week. “They have lost everything. If there wasn’t emergency aid by the federal government, these people would be condemned to starvation.”

Bolsonaro tested positive for COVID-19 in July of last year.

There is currently a Brazilian Senate inquiry into the government response to the pandemic. CNN reports that the opposition party has accused the president and his government of sabotaging isolation measures, threatening governors and mayors who applied restrictive measures, and refusing to wear masks or encourage their use. 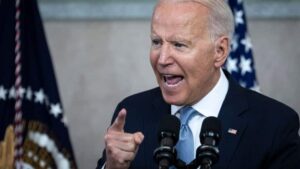 Biden: I'm Pushing To End Sale Of Multiple Round Rifles And Pistols