Multiple sectors saw huge jumps in inflation, even as gas prices have fallen

Inflation increased .1 percent from July and year-over-year inflation is up 8.3 percent, according to the latest report from the U.S. Bureau of Labor and Statistics (BLS).

Large increases in shelter, food, and medical care are offset by a 10.6 percent decline in gasoline.

The cost of food is up 11.4 percent from August 2021, the latest data show. Chicken prices are up 16.6 percent, the cost for eggs have increased 39.8 percent, and dairy is surging at 16.2 percent higher than a year ago.

Just a few months ago, inflation hit a 40-year high, partly driven by average U.S. gas prices that topped $5 per gallon for the first time in U.S. history. Over the summer, gas prices have declined due to low demand in the U.S. — high gas prices mean people drive less, impacting supply and demand — and lower global crude prices.

Yet, despite the summer dip in prices, the overall energy sector is up 23.8 percent from a year ago, while fuel oil is up 68.8 percent, gasoline is up 25.6 percent, electricity is up 15.8 percent, and utility (piped) gas is up 33 percent.

The Federal Reserve has attempted to dampen inflation with four separate hikes to the nation’s benchmark interest rate totaling 2.25 percent. But, amid the latest inflation data, the Fed is expected to announce another rate increase at next week’s meeting.

“Today’s CPI reading is a stark reminder of the long road we have until inflation is back down to earth,” said Mike Loewengart, head of model portfolio construction for Morgan Stanley’s Global Investment Office. “Wishful expectations that we are on a downward trajectory and the Fed will lay off the gas may have been a bit premature.”

The cost for hospital services saw a moderate year-over-year increase at 4 percent, but the cost for health insurance is 24.3 percent higher.

Rental costs are up 6.3 percent from last August.

Transportation services chalked up a 11.3 percent increase, while public transportation is 21.1 percent more expensive than last year, and airline fares have increased 33.4 percent.

“They’re watching for where inflation is coming from,” said Quincy Krosby, chief equity strategist at LPL Financial. “It’s very clear to them that it’s food, it’s transportation and it’s rent. Rent keeps marching higher. That is the most stubborn of everything the Fed is fighting at this point.” 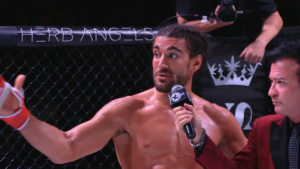 Former UFC Fighter Dead At 34 After Complications With Cancer