Yahoo has pulled its services from China, citing an “increasingly challenging” business and legal environment.

The company has been downsizing its operation in the country over the course of several years. It closed its Bejing offices in 2015. At that time it had already ended its email and music services.

“Yahoo’s suite of services will no longer be accessible from mainland China as of Nov. 1,” said a spokesperson for the company. “Yahoo remains committed to the rights of [its] users and a free and open internet.”

The announcement came as China enacted the Personal Information Protection Law, which regulated how data is collected and used by entities operating in the country.

Yahoo is the latest tech company to leave China amid amounting tensions between the country and the United States.

Microsoft’s LinkedIn announced last month that it was ending its localized social networking services which it had launched in 2014.

In a statement, the company said it was  “facing a significantly more challenging operating environment and greater compliance requirements in China.”

“Given this, we’ve made the decision to sunset the current localized version of LinkedIn, which is how people in China access LinkedIn’s global social media platform, later this year,” said Mohak Shroff, LinkedIn’s senior vice president of engineering.

“It’s not the end for Microsoft in China. It still makes software that is widely used, and its search engine Bing is still available in a country where Google is not. Even LinkedIn in China won’t go fully dark, as the company plans on retooling as a pure jobs board, removing any features that could run afoul of Chinese regulators,” reports Foreign Policy.

“In their place, Chinese companies have filled the void, creating an alternative internet with its own digital giants. The Baidu search engine has largely replaced Yahoo and Google in China, and WeChat and Weibo are the leading social media platforms,” per AP News.

Citing their ties to the government and military, the U.S. has restricted telecom giant Huawei and other Chinese technology companies. 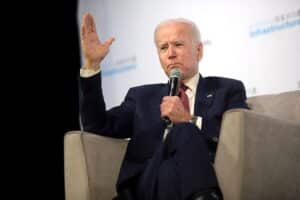 Over 40% of Democrats Do Not Want Biden To Seek Reelection, According to New Poll