The change to a pre-written answer, scheduled in advance, was meant to distance the game from the news cycle, but confused players

Wordle players expressed confusion on social media after a “recent news event” prompted the people behind the game to change today’s word.

The New York Times removed the word “fetus” from its Wordle answers to keep the game “distinct from the news,” The move is an apparent strategy to distance the game from last week’s news story related to a leaked Roe v Wade supreme court draft ruling.

My wife had FETUS and mine was SHINE

After sharing their result with friends on Monday, players expressed a mixture of confusion and annoyance only to learn there appeared to be two different answers.

Even when I refreshed my browser, I had two different answers

Many who played the daily puzzle discovered the answer to be the word “fetus.” However, for others who played the game, which is reset every 24 hours at midnight, the correct word was “shine.”

The New York Times said in a statement, “Today, some users may see an outdated answer for Wordle that seems closely connected to a major recent news event. This is entirely unintentional and a coincidence – today’s original answer was loaded into Wordle last year.”

“When we discovered last week that this particular word would be featured today, we switched it for as many solvers as possible,” the Times said.

According to the news outlet, the game’s answer list is pre-written and assigned to a future date for release.

“At New York Times Games, we take our role seriously as a place to entertain and escape, and we want Wordle to remain distinct from the news,” the Times said.

After the game became a viral hit in 2021, the New York Times acquired Wordle earlier this year.

According to the game’s creator, Josh Wardel, Wordle was set to “initially remain free to new and existing players” once it moved over to the Times’ site. Wardle said he would work with The New York Times to preserve players’ existing wins and streak data once the game heads to its new home.

Since the acquisition, The New York Times has made some modifications to the game. It also removed words such as “lynch,” “slave,” and “wench” to account for cultural context that could offend users. (However, attempts by Timcast to use these previously banned terms as guesses was possible.)

Monday’s change comes just one week after a written opinion was leaked from the U.S. Supreme Court that implied the Court intended to overturn Roe V Wade, a 1973 landmark case related to abortion rights. 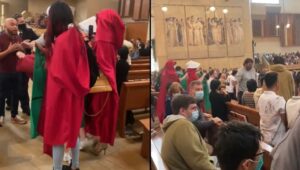 OPINION: What Prompts Abortion Activists To Raid A Hispanic Church On Mother's Day?