The project has been dubbed ‘dormzilla’

A dorm that would house 4,500 students at the University of California, Santa Barbara is being challenged for a series of unusual features, including its multitude of windowless rooms.

UC Santa Barbara has struggled to keep up with student housing needs. Some students currently reside in hotels to accommodate for the lack of dorm space. The school has budgeted an estimated $1.5 billion to solve the problem.

Charles Munger, the 97-year-old billionaire and vice-chairman of Warren Buffet’s Berkshire Hathaway, offered to donate $200 million to build a new dorm. There were two conditions — the building would be named Munger Hall and he would design the blueprints which had to be followed exactly.

The 11-story building is comprised of dorm rooms that rely totally on artificial light and ventilation. Approximately 94% of the small, single-occupancy bedrooms do not have windows. The 1.68-million-square-foot structure would be comprised of nine, identically planned levels that would be pre-fabricated offsite, which Munger argues would save on construction costs. Each floor would house 512 students.

Munger has funded similarly designed buildings in the past. He funded the Munger Graduate Residence Hall at the University of Michigan, a building that houses 600 graduate students in windowless apartments with six to seven bedrooms.

“He attended the University of Michigan and donated the majority of his $110 million gift to fund his vision of the $185 million dorm. At that time in 2013, it was the largest single donation the school had ever received. Michigan promoted the building as a ‘community of scholars,’ where graduate students of different disciplines constantly interact with each other in common areas, where there are windows,” reports CBS Detroit.

Students who live in the building have told media outlets about the necessity of sunlamps and the emotional turmoil of quarantining in their bedrooms because of COVID-19 exposure requirements.

Dennis McFadden, a Southern California architect, resigned from the university’s Design Review Committee after 15 years over the proposed plan.

McFadden said the plan was “unsupportable from my perspective as an architect, a parent, and a human being” in his Oct. 25 resignation letter to UCSB Campus Architect Julie Hendricks.

He said the dorm will not foster a “close-knit” community as Munger claims.

“An ample body of documented evidence shows that interior environments with access to natural light, air, and views to nature improve both the physical and mental wellbeing of occupants,” he wrote. “The Munger Hall design ignores this evidence and seems to take the position that it doesn’t matter.”

Additionally, the architect pointed out that the building does not reflect the other architectural style of the campus nor does it relate to the “spectacular coastal location” of the university. The building would be “an alien world parked at the corner of the campus” with even a rooftop courtyard that faces inward.

He said he chose to step down after an Oct. 5 meeting made evident to him that the plans were set in stone and the university intended to move forward. He believes that UCSB is not relying on compelling research or data that calls for the unusual floor plan and departure of standard sustainable principles.

“The design was described as 100% complete, approval was not requested, no vote was taken, and no further submittals are intended or required,” he said.

McFadden said, “As the ‘vision’ of a single donor, the building is a social and psychological experiment with an unknown impact on the lives and personal development of the undergraduates the university serves.”

On Nov. 2, McFadden penned an op-ed for the Los Angles Times further detailing the design’s failures.

“What will be known as the largest college dorm in the world ignores both research-based evidence identifying natural light, air and views of nature as necessary to our physical and emotional well-being, as well as basic principles of environmental sustainability,” he wrote. “This total reliance on energy-consuming artificial environmental systems, 24 hours a day, 365 days a year, also means that the building is not passively habitable: In the event of a power outage the entire building — all 4,500 residents — would have to be completely evacuated.”

In a statement following the controversy, the university said it was “delighted to be moving forward with this transformational project.”

“All our current housing projects are guided by our Campus Plan, which was developed through an extensive campus participatory process with the assistance of Urban Design Associates with the goal of providing affordable, on-campus housing that minimizes energy consumption, and reduces the number of students living in the neighboring community of Isla Vista and beyond,” the university said.

UC Santa Barbara plans to continue with construction, which is expected to be completed by February 2025. The UC Board of Regents and the California Coastal Commission still need to sign off on the building. 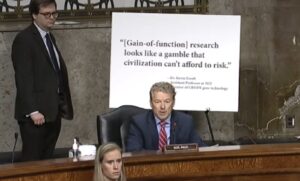 Sen. Rand Paul Says Dr. Fauci Was Trying to 'Cover His A--’ Over Gain of Function Research, Demands Resignation