'I am embarrassed and my actions were not indicative of the man I want to be,' the Oscar-winner said

Late Monday, Will Smith issued a public apology to Chris Rock on Instagram after a day of scrutiny following his assault against the comedian live during the Acadamy Awards.

On Sunday night, Rock cracked a joke onstage about Jada Pinkett Smith ‘s appearance, which led to her husband storming the stage, slapping Rock, and shouting, “Keep my wife’s name out of your f—ing mouth.”

“Violence in all of its forms is poisonous and destructive,” Smith said in the post.

“My behavior at last night’s Academy Awards was unacceptable and inexcusable,” he continued. “I would like to publicly apologize to you, Chris. I was out of line and I was wrong. I am embarrassed and my actions were not indicative of the man I want to be.”

Smith went on the address scrutiny from the Academy of Motion Pictures, who expressed concern over Smith’s behavior at the awards show.

“I would also like to apologize to the Academy, the producers of the show, all the attendees, and everyone watching around the world,” Smith stated.

The apology came less than 24 hours after the incident, which took viewers by surprise and sent a shock wave through social media and news stations on Monday.

Shortly after the awards show on Sunday, the Academy posted the following tweet: “The Academy does not condone violence in any form. Tonight we are delighted to celebrate our 94th Academy Awards winners, who deserve this moment of recognition from their peers and movie lovers around the world.”

Early Monday, People reported a follow-up statement from the Academy.

“The Academy condemns the actions of Mr. Smith at last night’s show,” the statement read. “We have officially started a formal review around the incident and will explore further action and consequences in accordance with our Bylaws, Standards of Conduct, and California law.”

According to a report from the New York Post, Smith’s actions are considered “assault” and implied that the Academy might be considering revoking Smith’s first-ever Oscar. 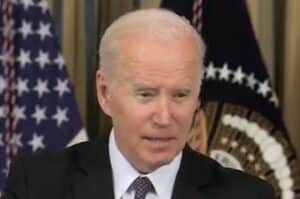 Biden Says He is Not 'Walking Back' Comments About How Putin 'Cannot Remain in Power,' Claims He Was Expressing 'Moral Outrage,' Not Policy