On Monday, Britain's High Court ruled that the famed publisher is allowed to appeal the ruling allowing for his return to the US.

Julian Assange, the founder of Wikileaks, has won the right to petition the UK’s Supreme Court to block his extradition to the US.

On Monday, the High Court ruled that he had an arguable point of law that Supreme Court justices may want to consider.

The ruling means Assange can petition the UK’s highest court for a hearing, delaying any extradition from the UK for now.

He is wanted in the US over the publication of thousands of classified documents in 2010 and 2011.

Assange has no guarantee of a hearing despite petitioning the Supreme Court. This means his case may take many more months to conclude.

Stella Moris, Assange’s fiancee, claimed the High Court ruling as a victory but said, “we are far from achieving justice in this case.”

“Let’s not forget that every time we win, as long as this case isn’t dropped, as long as Julian isn’t freed, Julian continues to suffer. For almost three years, he has been in Belmarsh prison, and he is suffering profoundly,” Moris said.

She added: “Our fight goes on, and we will fight this until Julian is free.”

The Wikileaks documents in question revealed that the US military had killed hundreds of civilians in unreported incidents in Afghanistan. Other leaked records showed that 66,000 civilians had been killed and prisoners tortured by Iraqi forces.

The US says the publication of those documents broke the law and endangered lives. However, Assange says the legal action of the US is politically motivated.

Last January, a lower judge ruled that while the US had a case to prosecute Assange, he could not be sent from the UK to stand trial because there was no guarantee that American authorities would assure his safety while imprisoned.

Amid fears that he would be subject to intense solitary confinement, lawyers for Assange argued his mental health meant the US would likely not stop him from taking his own life.

In December, the High Court reversed that decision, saying that the US had provided assurances proving Assange could be cared for safely.

Monday morning, Lord Burnett said there was now a legal question over how those assurances had been provided, allowing for further appeal by Assange.

“Assurances [over treatment] are at the heart of many extradition proceedings,” said Lord Burnett’s statement. He said the High Court refused permission to appeal – but whether or not the issue needs to be heard in the Supreme Court “is a matter appropriately for its decision.”

Lawyers for Assange now have 14 days to petition the Supreme Court for his appeal. 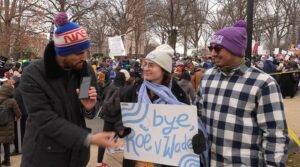