White House Says Another Attack in Kabul is 'Likely'

President Joe Biden has been briefed that another terror attack is “likely” to take place in Kabul.

The US military is drawing up plans to retaliate against ISIS-K for killing 13 US servicemembers and injuring 18 more near the airport on Thursday.

In a statement posted to the White House website, Press Secretary Jen Psaki announced that Biden met with his national security team in the situation Room on Friday morning. She said that they advised the president that “another terror attack in Kabul is likely, but that they are taking maximum force protection measures at the Kabul Airport.”

“Our commanders also updated the President and Vice President on plans to develop ISIS-K targets. The next few days of this mission will be the most dangerous period to date. The President reaffirmed with the commanders his approval of all authorities they need to conduct the operation and protect our troops, and all reported back that they have the resources they believe they need to do so effectively,” the statement continued.

During a press conference the day before, Biden vowed to hunt down the terrorists responsible for the bombings and make them pay. The administration is still working to have all Americans evacuated from Afghanistan by the Taliban’s August 31 deadline.

“We will not be deterred by terrorists. We will not let them stop our mission. We will continue the evacuation,” Biden said on Thursday during a press conference in the White House East Room.

“To those who carried out this attack, as well as anyone who wishes America harm, know this: We will not forgive. We will not forget. We will hunt you down and make you pay… We will respond with force and precision at our time and the place we choose and the moment of our choosing.”

Biden also told a reporter that the administration has “some reason to believe” that they know who was behind the attacks and that they will find ways to track them down without “large military operations.”

“With regard to finding and tracking down the ISIS leaders who ordered this, we have some reason to believe we know who they are — not certain. And we will find ways of our choosing without large military operations to get them.” 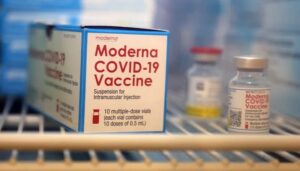 Japan Suspends Use of Moderna COVID-19 Vaccination After Contaminations