‘We're looking at an array of other options,’ Jean-Pierre told reporters on Air Force One

Prominent Democrats, including New York Representative Alexandria Ocasio-Cortez and Senator Elizabeth Warren, have called on the Biden Administration to provide abortions on federal lands in states where the procedure is now illegal following the repeal of the federal protection of abortions.

“We understand the proposal is well-intentioned, but here’s the thing: It could actually put women and providers at risk,” Jean-Pierre said during a press conference on Air Force One on June 28. “There’s actually dangerous ramifications to doing this.”

“In states where abortion is now illegal, women and providers who are not federal employees, as you look at the federal land, could potentially be prosecuted,” she added, per The Hill.

“We’re looking at an array of other options,” Jean-Pierre added.

While speaking to protestors in New York City, Ocasio-Cortez called opening abortion clinics on “federal lands in red states right now” the “babiest of the babiest of the baby steps” that President Joe Biden could take in the wake of the Supreme Court’s decision to overturn Roe v. Wade.

Vice President Kamala Harris said in an interview with CNN on June 27 that the Biden Administration was not considering providing abortion on federal lands.

“I think that what is most important right now is that we ensure… that we do everything we can to empower women to not only seek but to receive the care where it is available,” Harris said.

Harris added the federal government “will do everything” it can to defend access to abortion and that it was considering ways to aid women seeking abortions outside of their home states, including covering the cost of child care or travel.

Health and Human Services Secretary Xavier Becerra was asked about the possibility of using federal lands to provide abortions during a press conference on June 28.

“Every option is on the table,” Becerra said. “We will take a look at everything we can. And everything we do will be in compliance with the law.”

In addition to providing abortion on federal lands, “Democrats also called on the administration to expand access to medication abortion, and provide funding for people seeking abortion services outside of their home states, among other measures,” reports Newsweek.

One of the obstacles preventing the Biden administration from operating abortion clinics on federal lands in states with abortion bans is the Hyde Amendment, which prohibits federal funding from being used directly for abortion services. 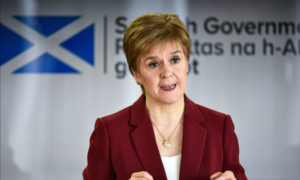