'Make no mistake, it is not Roe v. Wade codification, it is an expansion. It wipes 500 state laws off the books,' said Senator Joe Manchin

UPDATE: On Wednesday, Senate Republicans were joined by Sen. Joe Manchin (D-West Virginia) in opposing an effort to codify abortion rights in the United States in response to a leaked draft that indicates the U.S. Supreme Court is set to overturn Roe v Wade.

The Women’s Health Protection Act, HR3755, passed the House in September, but it failed to pass the Senate when it was put to a vote in February. It is being offered up again with amendments related to the potential reversal of landmark 1973 Supreme Court decision. However, it is expected to fail without the support of the Republican members of the chamber.

The measure refers to abortion access as “Reproductive Justice” and defines the term as follows:

“a human right that can and will be achieved when all people, regardless of actual or perceived race, color, national origin, immigration status, sex (including gender identity, sex stereotyping, or sexual orientation), age, or disability status have the … power and resources to define and make decisions about their bodies, health, sexuality, families, and communities in all areas of their lives, with dignity and self-determination.”

According to the bill, those most affected by restrictions on abortion are “people with low incomes, BIPOC, immigrants, young people, people with disabilities, and those living in rural and other medically underserved areas.”

HR3755 says that any change to safe and legal access to abortion affects “every person capable of becoming pregnant,” which the bill identifies under the term “woman or women.”

The bill seeks to remove restrictions at the federal level that limit access to abortion, making services legal, regardless of local laws. If passed, the bill would override hundreds of state laws concerning abortion nationwide.

The bill seeks to remove numerous restrictions. Lawmakers have focused on eliminating testing requirements prior to an abortion procedure. Additionally, they seek to remove restrictions on prescribing abortion-related drugs, including drugs used in medication abortions.

Moreover, lawmakers seek to remove any required delays or additional information visits on behalf of the patient seeking an abortion. According to the bill, removing this restriction would allow for “immediate abortion services.”

Requirements related to the credentials, facilities, and location of the abortion services and providers would also be eliminated by HR3755.

The bill also seeks to remove a “prohibition on abortion after fetal viability when, in the good-faith medical judgment of the treating health care provider, continuation of the pregnancy would pose a risk to the pregnant patient’s life or health” — thereby conceivably allowing for late-term abortions at the provider’s discretion.

The bill reiterates this by saying it seeks to remove a “requirement that a patient seeking abortion services at any point or points in time prior to fetal viability disclose the patient’s reason or reasons for seeking abortion services,” which the bill says can be based upon the patient’s “actual, perceived, or potential reason or reasons” for obtaining an abortion. It further seeks to remove that restriction “regardless of whether the limitation is based on a health care provider’s degree of actual or constructive knowledge” regarding the patient’s desire.

Should HR3755 pass, there would be fewer regulations and restrictions related to the facilities and staff providing the abortion services. It would allow for late-term abortions, regardless of fetal viability, and remove providers’ requirement to inform patients of alternatives and risks related to abortion.

The bill is unlikely to pass a vote in the Senate. However, Democratic leaders are pressing ahead with the procedural vote even though it is almost certain to fail to garner the 60 votes necessary to overcome a filibuster.

In a press conference last week, Senate majority leader Chuck Schumer took aim at the Republican party, saying, “Republicans across the country have worked to dismantle Roe; they have worked to take away the rights of women.”

He went on to say that Republican leaders across the country have essentially said to all women, “your body, our choice,” as he continued to place attention on the intent to create constitutional protection for abortion rights.

However, Senator Joe Manchin is one Democratic leader who will not vote in support of his party’s push for codifying abortion access.

“Make no mistake, it is not Roe v. Wade codification,” he said, speaking about the Women’s Health Protection Act.

“It is an expansion; it wipes 500 state laws off the books, it expands abortion, and with that, that’s not where we are today. We should not be dividing this country further than we’re already divided, and it’s really the politics of Congress that’s dividing the country,” Manchin continued.

Manchin refers to the abortion laws passed in the majority of the nation at the state level. More than half of the states have implemented restrictions or bans related to abortion services.

Should the Supreme Court overturn Roe in June, it will not make abortion illegal but rather return the legislative jurisdiction of abortion services to the state level. 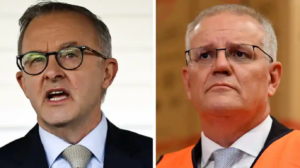