A private contractor, who won a bid under Biden's administration, has been flying plane loads of migrants to suburban New York at night

Planeloads of undocumented migrants are being secretly flown into suburban New York in an effort by the Biden administration to resettle them across the region quietly.

In newly released footage from airport security in August, a plane carrying migrants and government-contracted officials can be seen landing in the New York area and being transported to local family and shelters.

The footage was obtained via a Freedom of Information Act request by former Westchester County Executive Rob Astorino — a Republican who is running for governor in 2022.

According to reports, the charter flights originate in Texas — where the ongoing border crisis is overwhelming local immigration officials.

The flights have allegedly been happening on a regular basis since August.

Last week, The New York Post saw two planes land at the Westchester County Airport. Most of the passengers appeared to be children and teens.

Westchester County cops stood and observed the arriving passengers at about 10:49 p.m. on a Wednesday and again at 9:52 p.m. on a Friday. After deplaning, the passengers were loaded onto a bus and moved to another location.

The footage shows Westchester Police Sgt. Michael Hamborsky inquired with federal contractors about the unusual flights and why local police were not given any information about the arrival.

“You’re on a secure facility here; we really don’t know anything, and we’re in charge of security,” Hamborksy told one of the contractors.

“This is anti all our security stuff,” he said.

The private security firm, MVM Inc., secured a $136 million contract with the government in 2021 to transport migrants around the country. According to the New York Post, employees of the company were also on board the flight.

“I’m just trying to figure out what’s what, who’s who and how I’m supposed to keep this secure,” Hamborsky asked the employees of MVM, Inc.

“We’re not allowed to have our picture taken when we get on base,” one employee said to Hambrosky.

“Un-f–king-believable,” Hamborsky responded. “And who’s that by? DHS [Department of Homeland Security]?”

“Yes, and the United States Army,” the employee responded. “You’re on a federal installation, but DHS wants everything on the down-low.”

Another employee was captured saying to Hambrosky, “Listen, my thing is I like to comply, but technically we’re not supposed to show IDs or anything. Like I said, everything is supposed to be hush hush.”

A few passengers were seen meeting up with relatives or sponsors in New Jersey. However, many were dropped off at a residential facility on Long Island.

A closer look at flight-tracking data indicates that approximately 2,000 migrants have arrived in the area on 21 flights since Aug. 8.

Aviation records show many of the planes landed between midnight and 6:30 a.m., a time when airport staffing is at its lowest.

The work by MVM Inc. and the federal government raises questions about how the Biden Administration is handling a recent surge in illegal border crossings.

Editor’s Note: this article has been updated to add more details. 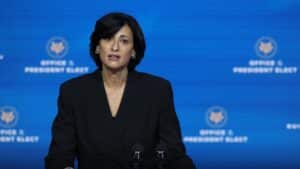 CDC Director on Omicron Variant: ‘Milder Does Not Mean Mild’