WATCH: Pelosi Says January 6 Was Like 'Somebody in the White House Dropped a Bomb on the Congress'

In a preview for an interview with Lester Holt, House Speaker Nancy Pelosi said that January 6 was like “somebody in the White House dropped a bomb on Congress.”

In the snippets that have been posted to social media, Pelosi says that she initially disregarded security telling her to evacuate the Capitol. Once she did, she said she was able to see images of what was happening from an undisclosed location.

“It breaks your heart — it’s as if somebody in the White House dropped a bomb on the Congress of the United States,” Pelosi said.

“It breaks your heart.”

One year after the Capitol attack, House Speaker Nancy Pelosi sits down for an interview with @LesterHoltNBC.

“But the thing that is unforgivable about January 6 is the traumatic impact that it had on the people who serve our country,” she added.

When she returned, Pelosi claims that in her staffer’s eyes she could see “the trauma, the fear of it all.”

“Whether it’s our police officers, or the staff. Our staffs are young, idealistic people who believe in our country and that they should be hiding under tables or behind locked doors with people banging on the door to do violence to them, or seeking their bosses…” Pelosi continued.

On the anniversary of the protest, Pelosi held a moment of silence on the House floor. She also praised congressional staff who were present.

The only Republicans in attendance were Dick and Liz Cheney.

“That day and the days after, they were the defenders of our democracy. And their courage and patriotism remain an inspiration,” said Pelosi. “Today, we accept responsibility as daunting and demanding as any previous generations of leadership have faced,” she said. “As we reflect on that darkest day, we remember that the insurrection sought not only to attack the building, but to undermine democracy itself.” 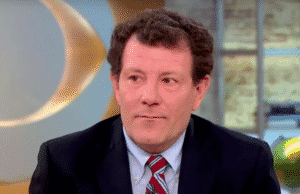