The policy was first suggested by Governor Jay Inslee on Jan. 6, 2022

The state of Washington is considering a bill that would make it a gross misdemeanor for an elected official or political candidate to lie about the results of an election.

Democrat Governor Jay Insee announced he would support any legislation that imposed legal consequences for officials who lied about the election on Jan. 6, the one-year anniversary of the security breach at the nation’s capital. At the time, no policy of this kind had been proposed.

“It should not be legal in the state of Washington for elected officials or candidates for office to willfully lie about these election results, and unfortunately they are doing that,” Inslee said at an event with the Associated Press. “This needs to be made illegal.”

“The violence of January 6 of last year is just a warning of what is coming and the basis of it is the ‘Big Lie,’” he added. “That’s [why] I’m calling on all elected officials of both parties to join together arm-in-arm and call that out.”

He said that his suggested legislation would not violate the First Amendment, which protects free speech. He also said it could prevent future violence.

“The courts have held that speech that promotes violence is something that can be regulated to protect the civil society,” Inslee said.

Nine senators subsequently sponsored the bill, which was heard by the state senate for the first time on Jan. 20.

“False claims about our election system are damaging, but such claims are even more damaging when made by elected officials,” the proposed bill read. “In the aftermath of the January 6th events, we saw how false statements about the 2020 general election resulted in imminent lawlessness that included five deaths, hundreds of injuries with at least 137 law enforcement officers who sustained injuries, and over $30 million in damage to the United States capitol.”

The sponsor used the 1969 Supreme Court case Brandenburg v. Ohio to justify the policy. In its ruling, the court found that speech that advocates for illegal conduct is protected under the First Amendment except in cases where the speech is likely to incite “imminent lawless action.”

“It is the intent of the legislature to hold elected officials and those that seek to hold an elected position who have taken an oath to uphold the Constitutions of the United States and state of Washington accountable and to prohibit these individuals from bringing forward false claims with the purpose of casting doubt on one of our most sacred institutions,” according to the bill.

Elected officials who are convicted of the proposed misdemeanor would have to vacate their offices. Individuals who have filed to run for an elected position could be charged with violating the law if their speech is determined to fit the parameters of false speech about an election. 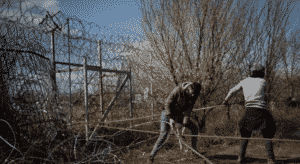