During an interview on Noticias Telemundo, Harris was asked, “President Biden promised immigration reform he hasn’t been able to deliver. Why would you say Latinos should vote for the Democrats this November?”

“The first piece of legislation that was sent to congress was immigration reform,” she replied. “It was our first initiative to say we must have a pathway to citizenship. The problem is that Congress is not acting.”

Biden’s immigration plan would have legalized more than 11 million undocumented immigrants already residing in the U.S. had the bill been approved by Congress.

Further, the bill would have also removed obstacles to family-based migration. It would have cleared visa backlogs and eased employment-based green card requirements. However, the bill failed to gather the ten Republican votes required to pass.

“The way our democracy works is you need a majority, and sometimes in the Senate, you need 60 of the 100 to actually act on certain kinds of initiatives,” said Harris. “We have to agree first of all this is an essential issue about what is right, what is fair, what is good for the economy in the U.S.”

“We must pass a pathway to citizenship. This should not be partisan. We should not allow Republicans or Democrats — if they do stand in the way of it — to get away with this as a partisan issue,” Harris concluded.

In 2021, immigration interactions at the U.S.-Mexico border reached an all-time high of 1.6 million people.

One attempt by the Biden administration to address the issue of immigration included offering funding and resources for Latin America.

“I believe very strongly that most people do not want to leave home. … When people leave home, it is usually for one of two reasons: either they flee from danger or they just can’t stay and take care of the basic needs of their families,” Harris said.

Since being appointed to oversee the migrant crisis in March, Harris has visited the southern border on one occasion. Last June, she appeared in El Paso, Texas to meet with border control officials.

Last April, Harris announced the U.S. was offering $310 million in emergency aid to the Northern Triangle, including $255 million to meet “immediate and urgent humanitarian needs” as part of the ongoing effort in injecting economic support for the immigration crisis. 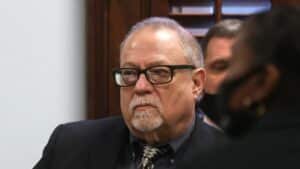