Last week, a Montgomery County, Virginia, school board member stormed out of a board meeting after a parent confronted her with photos from Facebook that depict the board member’s hypocrisy on mask mandates.

Video of the confrontation was shared in a tweet by radio host Clay Travis, showing the exchange between the parent and the board member.

The parent in the video shared her concern about ongoing school mask mandates with the Montgomery County school board. She alleged hypocrisy from the board members and accused them of reluctance to comply with recent executive order by Gov. Glenn Youngkin.

“We sat here last year and listened to you guys preach about Gov. Northam’s executive orders and how we must follow them,” she said, adding, “Here’s a governor who comes into office, but yet you don’t want to follow his orders.”

“Here’s a picture of you, right here, on Facebook with a crowd of people with no mask on,” she said, pointing to a photo displayed on her phone.

The board member interrupted her in an attempt to shut down the parent’s accusations, claiming her words were counterproductive and libelous. The board member claimed the woman was not using her speaking time to focus on issues relevant to school children.

The board member requested a police officer to escort the parent out of the building as she continued speaking on the matter. However, another board member spoke up on the parent’s behalf before the officer removed her.

“She should be allowed to say her peace,” the member said. “I’ve had to listen to people come and criticize me.”

After a heated exchange between the two board members, the pro-mask board member walked out of the meeting, and the public comments by the parent were ended. 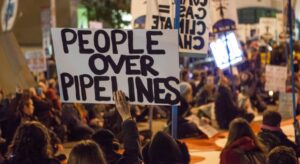 It’s Energy, Stupid: The Return of Malaise at Home and Abroad