The Uvalde Independent School District called the police to have CNN removed from their property on Wednesday.

Prokupecz had waited outside the school district office to ask Arredondo about the slow police response during the shooting at Robb Elementary, which left 19 students and two teachers dead.

CNN’s @ShimonPro confronts Uvalde schools police chief Peter Arredondo for the force’s decision to not cooperate with investigations into the police response to the Robb Elementary School shooting. pic.twitter.com/4DPocsn8OB

Arredondo has been named by Texas Department of Public Safety spokesman Steven McCraw as the person who made the “wrong call” on having officers hold back instead of engaging the killer.

The Uvalde Independent School District Police are now reportedly refusing to cooperate with the Texas Department of Public Safety investigation.

Arredondo was privately sworn on to the city council on Tuesday after winning the May 7 election.

The ISD Police provided Prokupecz with a statement denying that they are being uncooperative with the investigation — but still did not address many of his questions, including why the door did not lock.

Here is the statement just released. It addresses none of the questions. They say they’re cooperating with investigators. DPS told reporters yesterday the police chief has not returned their calls. pic.twitter.com/VYsdktHR8n

“UCISD has and will continue to work with law enforcement who are investigating the event and realize that many questions remain,” the statement said. “Because the investigation is ongoing and information is evolving, we are going to reserve comment until all state and federal agencies have completed their review.”

After the district provided the reporter with the statement, police arrived and told CNN to leave the property.

The school district office called the police to ask the media to leave their property. pic.twitter.com/uhwWLZe3ya

The Uvalde ISD Police officers told Prokupecz and his camera crew that city police would be arriving shortly and that they would be cited for criminal trespass.

“Once they get here, they’ll start issuing criminal trespasses for the property,” an officer tells Prokupecz in the video.

“Yeah, they want us to give you guys the initial warning, and then if you guys are still present, they’re going to issue criminal trespasses,” another officer said.

“‘Cause they themselves have asked y’all to leave,” the first officer added.

The reporter responded “ok,” and it appears the situation deescalated without any arrests or citations. 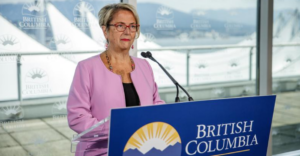