The United States has chosen to undergo a routine nuclear readiness test by launching an unarmed Minuteman III intercontinental ballistic missile from Vandenberg Space Force Base.

In an official statement released by the Air Force Global Strike Command, the launch was described as intended to “provide confidence in the lethality and effectiveness of the nation’s nuclear deterrent.” The statement also assured international observers that the test was not in response to current events, but part of a standard readiness and effectiveness regimen that has been conducted over 300 times before:

This test launch is part of routine and periodic activities intended to demonstrate that the United States’ nuclear deterrent is safe, secure, reliable and effective to deter twenty-first century threats and reassure our allies. Such tests have occurred more than 300 times before, and this test is not the result of current world events.

According to the Air Force, the ICBMs reentry vehicle traveled roughly 4,200 miles before accurately touching down on the island of Kwajalein Atoll.

“Make no mistake, our nuclear triad is the cornerstone of the national security of our country and of our allies around the globe,” said Flight Test Squadron Commander Chris Cruise. “This scheduled test launch is demonstrative of how our nation’s ICBM fleet illustrates our readiness and reliability of the weapon system. It is also a great platform to show the skill sets and expertise of our strategic weapons maintenance personnel and of our missile crews who maintain an unwavering vigilance to defend the homeland.”

“Our test launches are scheduled well in advance and are not reactionary to world events,” said Maj. Armand Wong. “A meticulous planning process for each launch begins six months to a year prior to launch. Our best Airmen from each of the three missile wings worked in conjunction with the 576th Flight Test Squadron to proudly showcase some very technical skills that comprise the heart of our nuclear deterrence mission.”

The test, which was originally scheduled to take place in March was first delayed following Russia’s invasion of Ukraine. It was further postponed earlier this month in order to prevent further stoking tensions as China conducted its own military drills in the Taiwan Strait. 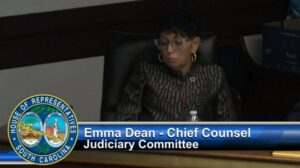 South Carolina Debates Near-Complete Abortion Ban, With Exception Only in Cases to Save the Life of the Mother (VIDEO)