US Halts Import of Mexican Avocados After Threat From Drug Cartel

The US “indefinitely” halted the import of avocados from Mexico on the eve of the Super Bowl.

Mexico’s Agriculture Ministry confirmed that shipments were halted after a United States Department of Agriculture plant safety inspector in Michoacan state was threatened.

“U.S. health authorities … made the decision after one of their officials, who was carrying out inspections in Uruapan, Michoacan, received a threatening message on his official cellphone,” the department wrote in a statement.

According to a report from the Associated Press, “avocado exports are the latest victim of the drug cartel turf battles and extortion of avocado growers in the western state of Michoacan.”

“It is not the first time that the violence in Michoacan — where the Jalisco cartel is fighting turf wars against a collection of local gangs known as the United Cartels — has threatened avocados, the state’s most lucrative crop,” the report explains. “Many avocado growers in Michoacan say drug gangs threaten them or their family members with kidnapping or death unless they pay protection money, sometimes amounting to thousands of dollars per acre.”

Michoacan is the only Mexican state that is fully authorized to export to the US. Since avocados are also grown in the US, fruits coming across the southern border are strictly inspected to make sure they are not carrying diseases that will harm crops in the states.

The Mexican avocado growers and packers association had just unveiled their ad for the Super Bowl on the day that the ban was announced.

“This year’s ad shows Julius Caesar and a rough bunch of gladiator fans outside what appears to be the Colosseum, soothing their apparently violent differences by enjoying guacamole and avocados,” the AP report stated. “The association did not immediately respond to a request for comment on the ban, which hits an industry with almost $3 billion in annual exports. However, avocados for this year’s Super Bowl had already been exported in the weeks prior to the event.”

Mexican exporters have long been buying ad space during the big game in an effort to make guacamole a tradition during the annual game.

Imports of the popular and expensive fruit were suspended by the US government indefinitely, “until further notice.”

In a statement about the ban, the US Embassy wrote that “facilitating the export of Mexican avocados to the U.S. and guaranteeing the safety of our agricultural inspection personnel go hand in hand.”

“We are working with the Mexican government to guarantee security conditions that would allow our personnel in Michoacan to resume operations,” the statement continued. 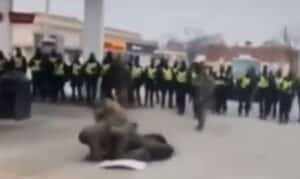 Police Clear Freedom Convoy Protesters From the Ambassador Bridge Between US and Canada, Make Dozens of Arrests