Unlike most available COVID-19 vaccines, this 'universal' vaccine does not use mRNA

Army medical researchers believe they are weeks away from announcing a new non-mRNA vaccine that is effective against all COVID-19 variants and SARS-origin viruses.

Scientists at the Walter Reed Army Institute of Research have been working on the project for almost two years. It has been the focus of their work since they first received a DNA sequence of the COVID-19 virus in early 2020.

The Spike Ferritin Nenoparticle COVID-19 Vaccine, or SpFN, “uses a soccer ball-shaped protein with 24 faces for its vaccine, which allows scientists to attach the spikes of multiple coronavirus strains on different faces of the protein,” per Defense One.

Each “ball” carries a spike protein that would trigger a protective immune response.

“It’s very exciting to get to this point for our entire team and I think for the entire Army as well,” Dr. Kayvon Modjarrad, director of Walter Reed’s infectious diseases branch, told the outlet.

“We decided to take a look at the long game rather than just only focusing on the original emergence of SARS, and instead understand that viruses mutate, there will be variants that emerge, future viruses that may emerge in terms of new species,” he said. “Our platform and approach will equip people to be prepared for that.”

“The hope is that this shot could be an effective ‘pan-coronavirus’ vaccine, which could target all sorts of coronaviruses,” according to Business Insider. “Such a vaccine could also be useful to prevent future pandemics, which are expected to be driven by other kinds of coronaviruses.”

It is currently undergoing the final reviews of Phase 1 of human trials, where it was tested against a collection of variants including Omicron. The institute reported this process was slow because of the need to find unvaccinated test subjects who had not previously contracted COVID-19.

“The Omicron variant spreads even faster than other coronavirus strains and accounted for nearly three-quarters of new infections in the U.S. last week,” reports The New York Post.

In the upcoming phases, the researchers will evaluate how the vaccine impacts people who have previously caught the virus or who have been vaccinated. 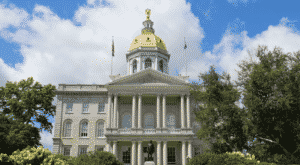