The Ivy League athlete who was permitted to compete based on gender identity does not believe women’s sports are threatened by biologically male athletes.

Lia Thomas became well known after breaking collegiate women’s swimming records after identifying as a woman while competing on the University of Pennsylvania’s swim team. Some female athletes and politicians said Thomas had an unfair advantage and should not have been permitted to swim against women.

In an interview with ESPN, Thomas said transgender women are women and should not be kept from competing on women’s teams.

To Thomas, saying biological men who identify as women take the place of a biologically female athlete is “no different than a cis woman taking a spot on a travel team or a scholarship.”

“It’s a part of athletics, where people are competing against each other,” Thomas said. “It’s not taking away opportunities from cis women really. Trans women are women, so it’s still a woman who is getting that scholarship or that opportunity.”

“If you say, like, you can compete, but you can’t score or you’re in an extra lane nine, that’s very othering towards trans people,” Thomas added. “And it is not offering them the same level of respect and opportunity to play and to compete.”

Thomas initially competed on the University of Pennsylvania’s men’s swim team for three seasons before deciding to take female hormones after coming out as transgender in May of 2019.

Thomas competed on the women’s team when the league recommenced, winning titles at several events and gaining national attention as a result. Thomas ultimately won the NCAA 500-yard championship in March of 2022 — defeating University of Virginia’s Emma Weyant by 1.75 seconds.

The debate on the fairness of allowing biologically male athletes to compete on teams based on their gender identity led to efforts to regulate athletics in multiple states.

In 2020, Idaho became the first state in the nation to ban biological men from competing in women’s sports.

Tennesee, Mississippi, Indiana, Alabama, Montana, South Dakota, West Virginia, Utah, Iowa, Arkansas and South Carolina have all rolled out policies requiring athletes at publicly funded schools and universities to compete on teams based on their sex at birth.

Athletic regulating bodies in Connecticut, Wyoming, and Washington D.C. all require schools to place athletes on teams that correlate with their gender identity.

Thomas graduated from the University of Pennslyvania this spring and will attend the school’s Carey Law School in the fall. The school describes itself as an “inclusive, welcoming community” that “works collaboratively toward one common goal: to lead the future of law.”

“Having seen such hateful attacks on trans rights through legislation, fighting for trans rights and trans equality is something that I’ve become much more passionate about and want to pursue,” said Thomas, who plans to focus on civil rights and public interest law. 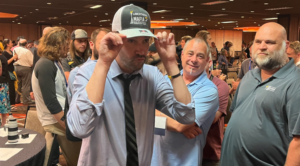 A Reporter at Large

Millennial-Led Mises Caucus Stages Takeover of the Libertarian Party: ‘We Are The White Pill’