Last week, five human fetuses were discovered in the Washington D.C. home of an anti-abortion activist indicted this week on federal charges for allegedly blocking access to a reproductive clinic in 2020.

Handy was one of nine people indicted last Wednesday for allegedly violating the federal Freedom of Access to Clinic Entrances Act in 2020.

On Monday, she pleaded not guilty to federal civil rights violations. Prosecutors did not seek to have Handy detained.

D.C. Police Chief Robert J. Contee III said the investigation of how Handy came to have the fetuses “continues on” and is in the “very preliminary” stage.

On Tuesday, Handy and the leadership of PAAU live streamed a press conference in Washington DC that was announced by the group last week.

The group’s focus was to respond to the events of last week and the reports that the fetuses recovered from Handy’s home were a product of legal violations prohibiting late-term abortion practices.

The laws in question are the Partial-Birth Abortion Act and the Born Alive Infants Protection Act.

The fetuses were recovered from a reproductive clinic run by Dr. Cesare Santangelo, who was captured on video by Live Action News in 2013 saying that he does not provide life-saving care for viable, premature babies born after a failed abortion.

Randall Terry, president of Operation Rescue, opened the press conference with Handy and Terrisa Bukovinac, the founder of PAAU.

Bukovinac said that she and Handy encountered a driver from Curtis Bay Energy, a company known for burning medical waste to produce energy for the Baltimore region. They approached the driver and asked to take one of the boxes after confirming it had come from the alleged Washington Surgical Clinic run by Dr. Santangelo. The driver allowed them to take possession of the box.

Bukovinac and Handy properly buried the smaller, earlier-term fetuses. After the burial, the two coordinated with Washington D.C. police to turn over the five late-term aborted fetuses, as previously reported.

Bukovinac pleaded to the D.C. police to engage in a full-scale investigation of the events, following the department’s claim they would not further investigate the circumstances of the infant deaths.

Handy then spoke about having coordinated a proper Catholic mass and burial for the aborted infants. She pled with authorities to conduct an investigation into the events surrounding the deaths of the five late-term aborted infants.

Both women asked lawmakers to take action on the laws concerning late-term and partial-birth abortions.

Jonathan Darnell, one of the nine indicted with Handy, said that fighting as an advocate often exposes one to adverse events.

“Apparently, the work we do of saving the lives of unborn persons is not as important as the work of saving born persons, as we are not allowed to speak about because we might offend someone,” Darnell said as he shared his desire to continue his advocacy regardless of the outcome of the indictment.

All of the individuals who spoke Tuesday asked for the enforcement of federal laws. They spoke directly about the ongoing record of Dr. Santangelo’s late-term and partial-birth abortion crimes. The group also called for the energy company to cease burning aborted remains to provide energy for the Baltimore region.

The team then played a short video of their opening of the box on the day they took possession from the Curtis Bay Energy driver.

Terry concluded the presentation with a direct condemnation of Christian clergy nationwide for not taking direct action like that of Handy and Bukovanic to end the practices of abortion and the related alleged crimes.

When responding to questions from reporters, the group said that to date, no lawmakers had contacted them regarding the events or any further plan of action.

Bukovanic stated that after consulting expert physicians to confirm the cause of death, they coordinated with D.C. Police to turn over the remains. However, Randall stated that the proper party to receive the remains would have been the federal government since the alleged crimes violate federal laws.

“I believe in people power, that people will speak up and make a difference,” Handy said in response to a question about whether or not they believed the federal government would take action.

The group said they had hoped to “embolden” and inspire enough Americans to speak up and help end legalized abortion in the United States.

Bukovanic said they coordinated with the Washington D.C. Metropolitan Police to take the fetal remains on March 29. Upon returning to the property in question, the FBI was present and made the arrest in connection to the federal indictment. According to Handy and Bukovanic, the FBI never entered the residence.

When asked about the burial and service of the 110 fetuses, Handy said that more information would be made available once a tombstone was secured with the names of the buried remains.

A reporter read a statement from Curtis Bay Energy stating that all of the alleged clinic boxes were delivered and properly disposed. However, Handy stated that the driver told them he had already scanned the boxes as delivered, which may account for the disparity of events.

Terry, Handy, and Bukovanic stated they were unsure what would be in the box but only sure of its origin, and their actions were solely based on assumption.

Bukovanic went on to say they have had no further contact with D.C. Police since turning over the remains. The group believes the remains are still in the custody of the department.

The group repeated their call for autopsies and conclusive input on the cause of death of the five infants in question. Terry called the refusal of the autopsy to be a coverup of crimes and malpractice.

Handy said she stands against “all forms of aggressive violence” when asked about any retaliation efforts towards Dr. Santangelo following the events of the last week. She called for all parties to act in a non-violent manner in pursuing justice and resolution of the events. 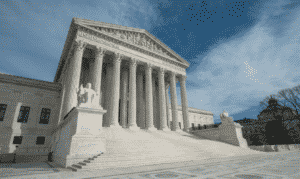