After an extensive review by the board of regents, the university president was removed based on rules he introduced in 2021

The University of Michigan‘s president was removed on Saturday for allegedly being in an “inappropriate relationship” with another university employee.

Mark Schlissel‘s removal was “effective immediately,” the University of Michigan’s Board of Regents said in a statement on its website on Saturday.

In a letter issued by the board, Schlissel, 64, was informed he was being fired from the role he has held since July 2014.

A complaint filed on December 8 made the university’s board aware of the alleged situation. After investigating, university leadership found that Mr. Schlissel used his university email account to “communicate with that subordinate in a manner inconsistent with the university’s dignity and reputation of the university.”

Schlissel had been the one to introduce the rules banning sexual relationships between supervisors and subordinates in July 2021.

The university has long been a respected learning institution and home to prominent students throughout the years. Currently, the youngest daughter of Barack and Michelle Obama, Sasha, 20, is enrolled. The university’s notable alumni include playwright Arthur Miller, Tom Brady, and Madonna.

In their letter to Schlissel, the board wrote: “As you know, the Regents received an anonymous complaint regarding an alleged sexual affair between you and a subordinate.”

The university released 180 pages of redacted email correspondence between Schlissel and the other employee. The email exchange between both parties appears to have started in 2019 and continued until late 2021.

“These emails demonstrate that you were communicating with the subordinate through the University of Michigan email system using an inappropriate tone and inappropriate language,” the letter stated.

The university introduced its supervisor-employee relationships policy last summer to improve its handling of sexual misconduct.

According to the letter, the board felt Schlissel’s conduct was “particularly egregious,” especially in light of his “involvement in addressing incidents of harassment by university personnel.”

“There can be no question that you were acutely aware that any inappropriate conduct or communication between you and a subordinate would cause substantial harm to the dignity and reputation of the University of Michigan,” the letter stated.

The married father of four, Schlissel was removed immediately, losing his position that included a $927,000 annual salary. 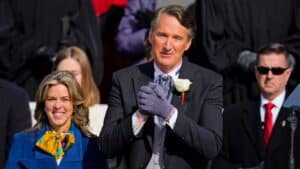 5 responses to “University of Michigan President Fired for ‘Inappropriate Relationship’”