Ukraine has ceded control of the southeastern Port City of Mariupol to Russia after its remaining forces were ordered to stop fighting.

More than 260 Ukrainian soldiers holding out in the Azovstal steel factory were evaluated between May 16 and May 17. They were escorted by Russian forces. At least 50 of the soldiers are reported to be seriously wounded.

The details of the evacuation agreement are relatively unknown.

Ukrainian Deputy Prime Minister Iryna Vereshchuk said in a statement on Telegram that once the wounded servicemen’s conditions stabilize, they would be exchanged for Russian prisoners of war.

“We are working on the next stages of the humanitarian operation,” she said, per the Los Angeles Times.

However, Russian Parliament member Vyacheslav Volodin is reported to have said there are “war criminals” among the Ukrainian soldiers who defended the steel plant and that they should face a trial.

In a video statement released on May 16, Ukrainian President Volodymyr Zelenskyy said that it had been a “difficult day” but that the country would now focus on “protecting our country and our people.”

“Thanks to the actions of the Ukrainian military — the Armed Forces of Ukraine, intelligence, the negotiating team, the International Committee of the Red Cross and the United Nations, we hope that we will be able to save the lives of our guys,” the Ukrainian president added. “Among them are the seriously wounded, they are being provided with medical aid.”

Ukrainian Deputy Defense Minister Hanna Maliar also told the media the injured soldiers would be exchanged in upcoming negotiations with Russia. She did not describe the end of fighting as a loss but instead said that “Mariupol’s defenders have fully accomplished all missions assigned by the command.”

The status of the negotiation remains unclear.

“Ukraine has in fact quit the process of negotiations,” Russia’s Deputy Foreign Minister Andrey Rudenko told the press on May 17. The Kremlin has described the soldier’s departure from the steel plant as a mass surrender.

Mariupol is roughly 30 miles from the Russian border and had a population of 400,000 people. It was a critical target for Russia during the eight-week invasion as it provides a landbridge to the Crimean peninsula. The city is also a major trading port.

“Russia has cited the controversial white supremacist history of the right-wing Azov Batallion, a Ukrainian military unit defending Mariupol, with Putin defending the invasion as an effort to ‘denazify’ Ukraine,” reports Forbes. “But the unit claims to have shed its more extreme elements.”

The victory for Moscow comes as it prepares for the expansion of NATO. Sweden and Finland officially announced over the weekend they will apply to join the military alliance Russia regards as a threat to its national security. 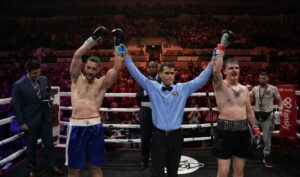