‘Maybe that's a controversial thing to say, but it just seems to me to be sensible,’ said Johnson

British Prime Minister Boris Johnson publicly announced his opposition to allowing individuals who identify as transgender to compete in sports based on their gender identity rather than their biological sex.

“I don’t think biological males should be competing in female sporting events,” Johnson said in an interview with reporters on April 6. “Maybe that’s a controversial thing to say, but it just seems to me to be sensible.”

“I also happen to think that women should have spaces — whether it’s in hospitals, prison or changing rooms — which are dedicated to women,” the prime minister added. “That’s as far as my thinking has developed on this issue.”

Johnson acknowledged that the issues surrounding gender identity are “complex” and “can’t be solved with one swift, easy piece of legislation.”

“It takes a lot of thought to get this right,” Johnson said. He acknowledged that his opposition to allowing biological men to compete against biological women would not be shared by everyone.

“If that puts me in conflict with some others, then we have got to work it all out. It doesn’t mean I’m not immensely sympathetic to people who want to change gender, to transition and it’s vital we give people the maximum love and support in making those decisions,” Johnson said.

In the United Kingdom, the debate over rights for transgender athletes peaked after transgender cyclist Emily Bridges was declared ineligible to compete in an elite women’s race.

Bridges took part in British Cycling’s Senior Academy as a male through 2019. In 2018, Bridges set a national junior men’s record over 25 miles.

“We fully recognise the rights of people to change and to make that transition,” said Lappartient. “I’m a little bit worried that [their participation in women’s events] will affect the fairness of competition. I believe that maybe the situation we have now, of the rules of five nanomoles per litre [to measure testosterone levels], is probably not enough.”

“Opponents of male-born athletes in women’s sports argue that reducing testosterone is not enough to compensate for physical advantages of post-pubescent males, such as muscle mass, bone density and lung capacity,” notes The Washington Times.

The issue is being compared to the American debate over Lia Thomas, a transgender swimmer who won the women’s Division 1 national championship in the 500-yard freestyle on March 17. The NCAA’s decision to permit the University of Pennsylvania student to compete based on gender identity rather than biological sex was widely denounced as unfair to female athletes.

“During the last season Thomas competed as a member of the University of Pennsylvania’s men’s team, she ranked 554th in the 200 freestyle, 65th in the 500 freestyle and 32nd in the 1,650 freestyle,” noted Cameron Smith in a column for The Tennessean. “At the end of her collegiate career, when she transitioned and competed on the women’s team, she moved to fifth, first and eighth in those respective events.”

“The biological advantages can’t be denied even after hormone therapy,” Smith added. 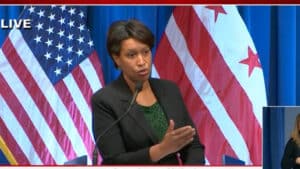