Two men were arrested by police in New Zealand this week for allegedly attempting to smuggle a large order of Kentucky Fried Chicken into the city of Auckland, a town that has banned fast-food take-out as part of their strict COVID lockdown orders.

“Police said they found them with a car boot-full of Kentucky fried chicken and over $100,000 in cash as they tried to cross the border into Auckland despite New Zealand’s strict Covid-19 lockdown,” reports The Guardian.

“The men were arrested after allegedly trying to flee from police near the Auckland border. When their car was searched, police said they found a large quantity of KFC, as well as the cash and a number of empty ounce bags,” adds the British newspaper.

The arrest sparked an uproar from some residents in Auckland that have been unable to order food from their favorite restaurants for more than a month.

Images released by the police show three buckets of chicken, 10 “tubs” of coleslaw, and an undetermined amount of French fries.

If found guilty, the pair could face up to six months in prison and a fine of $4,000. 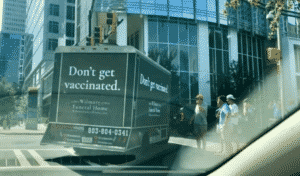