Lawsuits were filed in two separate Courts of Appeals by attorneys general from across the country seeking to block the Biden administration’s vaccine mandate requirement for private businesses.

Following an executive order from President Joe Biden in September, companies with 100 or more are compelled to mandate that their employees get vaccinated.

Workers have until Jan. 4 to get vaccinated or else they will have to undergo weekly COVID testing.

They argue that the Occupational Safety and Health Administration vaccine mandate is “unconstitutional, unlawful, and unfair.” They want the court to block the mandate from going into effect until a judicial review is completed.

Filed in the Court of Appeals for the 8th Circuit, the lawsuit contends the mandate infringes on the 10th Amendment, which ensures the separation of powers. A similar argument was made by government contractors during their lawsuit objecting to the vaccine requirements, notes Forbes.

“The federal government should not be forcing private employers to require their employees to get vaccinated or foot the cost to test those employees weekly,” said Missouri Attorney General Eric Schmitt. “Local business owners have told me that the vaccine mandate would decimate their businesses.”

A second lawsuit was also filed on Nov. 5 in the 6th U.S. Circuit Court of Appeals by West Virginia, Kentucky, Idaho, Kansas, Ohio, Oklahoma, and Tennessee. The AGs are likewise seeking immediate stay and a preliminary injunction.

In the filings, the states say that OSHA was permitted by Congress the power to introduce “emergency temporary standards … for the express purpose of protecting employees from grave dangers” due to possible workplace hazards or exposures like harmful toxins. The AGs contend that the agency does not have the authority to  regulate “risks that are equally prevalent work and in society at large.”

“OSHA’s vaccination mandate represents a real threat to individual liberty,” Attorney General Morrisey said in a press release. “As we have seen throughout the country, it is also a public policy disaster that displaces vulnerable workers and exacerbates a nationwide shortage of frontline workers, with severe consequences for all Americans.”

This morning, a group of six states, including West Virginia, Kentucky, Ohio, Idaho, Kansas, and Tennessee, filed a lawsuit in the Sixth Circuit challenging the Biden Administration/OSHA unlawful vaccine mandate.

The West Virginia AG will fight for your liberty and your jobs!

Tennessee Attorney General Herbert H. Slatery noted in his statement that the mandate is “an unprecedented expansion of emergency regulatory powers by a federal agency.”

“Its scope and breadth is only exceeded by its length (about 500 pages),” he added. “It also fails to consider the many steps already taken to prevent the spread of COVID-19 by individuals, employers and our state.”

Biden’s mandate affects 84 million workers employed by private companies, which will be fined about $14,000 for each violation of the mandate. 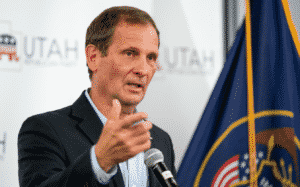 US Intelligence Could Lose Thousands of Officers Because of Vaccine Mandate