YouTuber Marques Brownlee noted the presence of the new gray check mark on his account’s profile in an early Wednesday tweet.

“So now there’s two verified checks. One that shows next to your profile in replies, retweets, and everywhere else: it means you’re a Twitter Blue subscriber,” Brownlee said. “The other one (“Official”) only shows up on certain profiles and on tImeline [sic]……”

“Update: It’s now gone,” Brownlee followed up just under two hours after his initial post announcing the “official” gray check mark had disappeared from his profile.

I just killed it

“Blue check will be the great leveler,” Musk followed up shortly after.

“A lot of folks have asked about how you’ll be able to distinguish between @TwitterBlue subscribers with blue checkmarks and accounts that are verified as official, which is why we’re introducing the ‘Official’ label to select accounts when we launch,” said Crawford in her Tuesday announcement, noting the “official” label could not be purchased and would not be granted to all previously verified accounts.

“Accounts that will receive it include government accounts, commercial companies, business partners, major media outlets, publishers and some public figures.”

Not all previously verified accounts will get the “Official” label and the label is not available for purchase. Accounts that will receive it include government accounts, commercial companies, business partners, major media outlets, publishers and some public figures.

“The new Twitter Blue does not include ID verification – it’s an opt-in, paid subscription that offers a blue checkmark and access to select features,” Crawford elaborated. “We’ll continue to experiment with ways to differentiate between account types.”

Twitter’s blue check mark was scheduled to be available for the subscribers of the revamped Twitter Blue service Wednesday following Tuesday’s midterm election.

“Please note that Twitter will do lots of dumb things in coming months,” Musk continued just before noon Wednesday. “We will keep what works & change what doesn’t.”

Please note that Twitter will do lots of dumb things in coming months.

We will keep what works & change what doesn’t.

The short-lived “official” check mark follows a string of changes to the platform following Musk’s late October acquisition of Twitter. On Nov. 1, Musk announced a price increase from $4.99 to “$8” for the platform’s Twitter Blue service. The platform’s previously employed blue check mark “verification” badge would also be rolled into Twitter Blue in a move that was met with criticism from many previously verified users.

“Twitter’s current lords & peasants system for who has or doesn’t have a blue checkmark is bull—-,” said Musk, noting what appeared to be an arbitrary verification process. “Power to the people! Blue for $8/month.”

Twitter’s current lords & peasants system for who has or doesn’t have a blue checkmark is bullshit.

Power to the people! Blue for $8/month.

The new Twitter owner further announced Twitter Blue subscribers would receive priority algorithm placement in replies, mentions, and search, which Musk described as “essential” to defeat spam and scams on the platform. Users will also have the ability to make longer video and audio posts along with experiencing “half as many ads.” 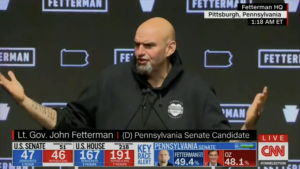 'We Jammed Them Up': Fetterman Defeats Oz For Pennsylvania Senate Seat