Trump Responds to Possibility of Pence Running for President in 2024, Doubts His Chances of Winning

Former President Donald Trump responded to the possibility of former Vice President Mike Pence running for president in 2024 by saying that it would be a “hard” race for him and doubting his chances of winning.

Trump make the comments during an interview with CBN News published on Wednesday.

Though Trump has not officially announced his candidacy, he is expected to run for a third time in the next election.

When asked about his relationship with Pence, Trump said that he “disappointed” him by voting to certify the 2020 election results for Joe Biden.

Pence signaled that he was open to running during an interview with Fox Business in March.

According to data from YouGov, Pence’s popularity rating is currently at 28 percent, while he is disliked by 45 percent. 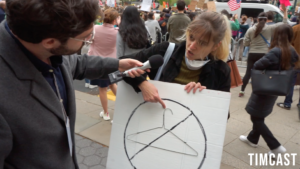