Trump has been calling for Biden to step down over his handling of the withdrawal.

The 90-second ad was created by the Save America PAC, which was started by Trump following the 2020 presidential election.

“Joe Biden lied to America and to the World when he told us ‘America was back.’ Instead, he surrendered to the Taliban, and left Americans behind to die in Afghanistan,” a spokesman for the Save America PAC said in a statement.

“This will go down as one of the greatest Military failures in American history. Now, it’s the Taliban that is back – not America,” the spokesman added. “This is not the America we know and the media refuses to hold Biden accountable for the destruction and tragedy he’s caused. It’s time for the truth.”

The ad is a montage of photographs and videos highlighting the inflation since January, the handling of COVID, the border crisis — and of course, the chaos in Kabul as the Taliban took control of the city.

Another ad released by the PAC earlier this month featured Afghans falling from planes as they attempted to hold on and flee the country. It referred to the chaos as “worse than Saigon.”

In a statement released as the Taliban took control, Trump called for Biden to “resign in disgrace.”

“It is time for Joe Biden to resign in disgrace for what he has allowed to happen to Afghanistan, along with the tremendous surge in COVID, the Border catastrophe, the destruction of energy independence, and our crippled economy,” Trump said.

The former president added, “it shouldn’t be a big deal, because he wasn’t elected legitimately in the first place.” 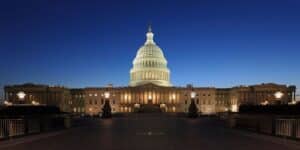