According to the latest poll from Rasmussen Reports, the Republican’s lead is outside the margin of error.

The pollsters also found that Trump would win among independents and almost evenly split Hispanic voters.

“Trump would get 81% support from GOP voters and Biden would get 75% of Democrats if the election were held today. Among voters not affiliated with either major party, however, Trump would win by a 16-point margin, with 45% to Biden’s 29% of the vote,” the pollsters found.

“Less than one year into his presidency, 52 percent of likely voters have an unfavorable impression of President Joe Biden. This is astounding, given the fact that the mainstream has given Biden the benefit of the doubt so often and glossed over his administration’s utter failures concerning the pandemic, inflation, foreign policy, et cetera” said Chris Talgo, senior editor and research fellow at The Heartland Institute. “On the other hand, 51 percent of likely voters now have a favorable opinion of former President Trump. In fact, more likely voters would vote for Trump over Biden if the next presidential election were held today. It seems like American voters are experiencing a classic case of voter’s remorse.”

When breaking down support by race, Trump would win 51 percent of white voters to 36 percent for Biden.

The pollsters added, “Trump gets his strongest level of support from married voters with children at home, while Biden’s highest support is among the unmarried and childless.”

The survey of 1,016 U.S. Likely Voters was conducted on January 5, 2022 by the Heartland Institute and Rasmussen Reports. The margin of sampling error is +/- 3 percentage points with a 95% level of confidence. 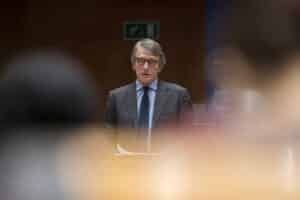 David Sassoli, The Socialist President of the European Parliament, Has Died