On Wednesday, Canadian Prime Minister Justin Trudeau caused an uproar in the House of Commons by accusing a Jewish Conservative Party member of supporting “people who wave swastikas.”

Trudeau made the comments during the daily questioning period in the Canadian Parliament after facing criticism from Conservative MP Melissa Lantsman, the first Jewish woman elected to her party last October, according to Fox News.

During the parliament session, Lantsman recounted two quotes from Trudeau, including one in which he criticized the “Freedom Convoy” protesters who have staged ongoing anti-COVID demonstrations in Ottawa.

Brian Lilley, a columnist for the Toronto Sun, posted the video to Twitter and said Trudeau owes an apology for his comments.

SHOCK VIDEO: PM @JustinTrudeau answers a question from Conservative MP @MelissaLantsman, a Jewish woman and descendent of Holocaust survivors by saying Conservatives stand with swastikas.
This is beneath Trudeau and his office and he should apologize. #cdnpoli pic.twitter.com/cxHNEaJKGJ

You can hear the exchange between Lantsman, Trudeau, and the other chamber members in the video.

She said that Trudeau has chosen to “fan the flames of an unjustified national emergency.”

Trudeau’s response to Lantsman created an uproar in the chamber discussion, as he aimed extreme commentary regarding the protests and those in support of ending COVID restrictions in Canada.

Conservative MP Dane Lloyd criticized Trudeau regarding the comments and requested an apology.

“Mr. Speaker, I’ve never seen such shameful and dishonorable remarks coming from this prime minister. There are members of this Conservative caucus who are the descendants of victims of the Holocaust,” he said.

After Trudeau left the lower chamber, Lantsman addressed Trudeau’s comments asking for an apology from the Prime Minister.

This far, there has been no further comment from Trudeau following Wednesday’s exchange. 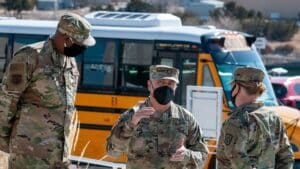