The head of a Thai-based media company announced the reported $20 million purchase of the Miss Universe organization, one of the longest-running and most-watched competitions in the world.

Jakkapong “Anne” Jakrajutatip is the CEO of JKN Group, a media company in Thailand. Jakrajutatip, who identifies as transgender, is a well-known reality television star in Thailand who also runs the transgender-rights organization the Life Inspired for Transsexual Foundation.

Jakrajutatip called the purchase of the Miss Universe organization a “strong, strategic addition” to the JKN Group’s portfolio because of “the global reach of the organization, its relationships with global partners and brands, and its wealth of content, licensing, and merchandising opportunities.”

“We seek not only to continue its legacy of providing a platform to passionate individuals from diverse backgrounds, cultures, and traditions, but also to evolve the brand for the next generation,” Jakrajutatip said in a statement to the media. JKN Metaverse Inc., the company’s United States-based subsidiary, will own and operate the pageant.

NPR, which reported the price of the sale as $20 million, noted that Jakrajutatip spent the equivalent of $1 million on “sex reassignment surgery and other procedures” after achieving financial success.

“The Miss Universe Organization exists to advocate for a future forged by women with the courage to push the limits of what’s possible, who are curious in the discovery, and the audacity to do it again,” the MUO website states. “We know how important it is to reach gender equity for the good of all people.”

The first transgender competitor in a Miss Universe pageant was Angela Ponce, Miss Spain, in 2018, per NBC.

The MUO oversees other pageants including Miss USA and Miss Teen USA. The organization is currently investigating allegations that the 2022 Miss USA pageant was rigged to favor one candidate over other competitors. Current CEO Amy Emmerich and president Paula Shugart will remain in their leadership positions.

“Paula and I see tremendous opportunity with JKN to create further growth for this organization on the global stage and women around the world,” Emmerich said in a statement on Oct. 26. “Despite having recently celebrated the organization’s legacy of more than 70 years, we are just getting started.”

“We are proud of our team’s success growing and expanding the Miss Universe Organization by utilizing the power of the Endeavor network, drawing on expertise across talent, digital, content, partnerships and licensing,” Endeavor’s president Mark Shapiro told Variety regarding the sale of the MUO. “We’re equally proud of the progress the organization has made in becoming a more inclusive and powerful platform where women can advance both their business objectives and their cause-based work.” 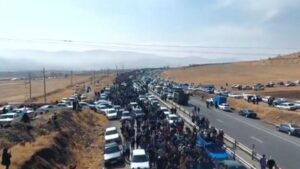