Top Pentagon Official: ISIS-K Could Be Able To Attack US Within A Year

The ISIS-K terror organization could be able to carry out attacks against the United States within a year, a senior Defense Department official said during a Senate Armed Services Committee hearing.

“While the United States has ended its military mission in Afghanistan, we must continue to ensure that al Qaeda, ISIS-K, and other terrorist groups cannot use Afghanistan to attack the United States and our allies,” Reed said. “We must remain vigilant about these threats and ensure that we establish an effective and robust counterterrorism architecture moving forward.”

Reed asked Pentagon Under Secretary for Policy Colin Kahl if he agreed with Gen. Mark Milley, the chairman of the Joint Chiefs of Staff, who said that “there may be a resurgence of international terrorism emanating from the region within 12 to 36 months.”

Kahl responded, “I think the assessment depends on which group we’re talking about.”

“I think the intelligence community currently assesses that both ISIS-K and Al Qaeda have the intent to conduct external operations, including against the United States, but neither currently has the capability to do so,” Kahl said.

“We could see ISIS-K generate that capability in somewhere between 6 or 12 months,” Kahl added. “I think the current assessments by the intelligence community is that Al Qaeda would take a year or two to reconstitute that capability, and … we have to remain vigilant against that possibility.”

However, Kahl claimed that he believes that the threat to the American homeland was still at its lowest level since Sept. 11, 2001, despite his assessment. Kahl’s conclusion prompted backlash from some senators who believe it was contradictory to his warnings.

“It doesn’t sound like a low risk when you have just told us that the possibility of an attack from ISIS-K on our homeland could come six to 12 months from now,” Sen. Joni Ernst (R-IA) said.

An ISIS-K terrorist was behind the suicide bombing at Kabul airport that killed 13 U.S. servicemembers days after being released from Bagram prison by the Taliban.

The Biden administration retaliated by ordering a drone strike on a suspected ISIS member. Unfortunately, according to a report from the New York Times, the man targeted was actually “Zemari Ahmadi, a longtime worker for a U.S. aid group.”

The Biden administration originally claimed that there were no civilian casualties. However, the drone strike ended up killing 10 civilians, including 7 children, – and zero terrorists. 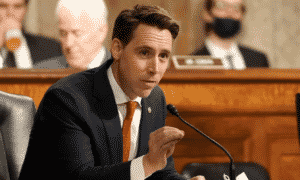