Dr. Fauci and Dr. Walensky are giving new insights into the surge of the Omicron variant

The nation’s top health officials are warning that the situation will only get worse if Americans don’t take action to curb the spread of the Omicron variant of the coronavirus.

On Tuesday, Dr. Anthony Fauci said that the rapid spread of this variant is something he has not often seen.

“Certainly, this is unprecedented to see this rapidity for which any individual virus spreads throughout the world. It is really extremely unusual. It’s a doubling time of two to three days, closer to two days. That is truly unprecedented in the rapidity in which a virus spreads,” Fauci said in an interview on ABC’s Good Morning America.

"It’s really extremely unusual. It’s a doubling time of two to three days … that is truly unprecedented in the rapidity in which a virus spreads." — Dr. Fauci on the omicron variant's dominance in the U.S. https://t.co/r43LRwieVO pic.twitter.com/r6cSEsPLA8

The Centers for Disease Control and Prevention (CDC) released data Monday confirming variant now accounts for 73% of Covid cases in the U.S. The data showed that the variant would jump six-fold week-over-week. In a matter of weeks, it has overtaken the Delta variant, which had been the nation’s dominant strain since July.

Monday, the first documented death from the variant was reported in Houston, Texas.

So far, cases of the variant have been mild compared to the Delta variant. Fauci warned Monday that the quick transmission of the virus could counteract any positive effects of a less severe variant of the virus.

“The idea that it can spread so rapidly, even if in fact it is less severe, and it appears at least from the South African data that there is less of a ratio of hospitalization to cases and duration of stay in the hospital, so it very well may be less severe. We’re hoping that that’s the case, and we’re hoping that as this evolves here in the United States that that will be our experience,” Fauci said.

Fauci believes that holiday travel and plans are still safe as long as a person is fully vaccinated, boosted and takes all recommended safety precautions to protect others.

“If you are vaccinated and particularly boosted, and you are going to be involved in an indoor home setting with family, relatives who are also vaccinated and boosted, you could feel comfortable in doing that social interaction,” he said.

Early data has shown that the two-shot regimen of the Pfizer-BioNTech and the Moderna vaccines are unlikely to prevent infection from the Omicron variant. However, data from the CDC implies it will reduce severe illness and the possibility of hospitalization.

The same data also seems to present a higher defense against the virus with an additional booster of the vaccine. This has resulted in officials urging for the booster for all Americans who have previously been vaccinated.

Dr. Rochelle Walensky, director of the CDC, told CNBC’s Shepard Smith that the definition of “fully vaccinated” is being discussed further following data from the Omicron variant.

“We’re examining this definition of course, but what I want to be very clear about is CDC recommendations right now say that everyone who is over the age of 18, when they become eligible, should get their booster shot,” she said.

She also warned that the current two-dose vaccine protocol does not protect people from an infection from the new strain. While omicron is often a more mild infection, especially for vaccinated people, there is still the risk of developing complications due to the virus. 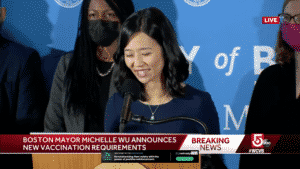