He said the designers have become creatively limited because they fear offending people and the potentially devastating backlash.

“Cancel culture has made me rethink everything I design,” Ford said in an interview with ES Magazine.

He noted that a “zero-tolerance policy” could be “great in many ways” but it has negative results for creatives.

“You really have to think and rethink everything you do. ‘Oh my God, will it offend anyone, is this going to be misinterpreted?’” he said. “As a designer, of course we always appropriated things from a lot of different cultures, but it was seen as a form of celebration and honouring that particular culture. … Now you have to think twice because it can be called out as appropriation.”

In today’s climate, he noted that designer Yves Saint Laurent could not have created his 1977 Chinese collection or his 1976 peasant collection.

“It’s gotten tough to be creative,” Ford added. “Actually it has gotten very hard to be spontaneous, I think, in today’s world because you have to rethink yourself.”

Ford has also said he missed when celebrities didn’t have stylists because they took “bigger risks.”

Several major fashion brands have reported significant losses after being criticized online for their use of racial stereotypes. In 2018, Italian brand Dolce & Gabbana released a set of videos in China showing that showed a Chinese woman trying to eat famous Italian dishes such as pizza and spaghetti with chopsticks. The ads sparked ire across Asia and the brand was denounced for its “racism and playing up to stereotypes.”

Dolce & Gabbana’s apology did not stop the fallout.

“A report found that sales for Dolce & Gabbana were down 98% in the country from the same period last year,” wrote Better Marketing. “The figures are shocking, but when you consider Chinese shoppers are the biggest buyers of luxury goods, it becomes clear how big of a mistake their ad campaign was.”

Designer Marc Jacob was denounced for his decision to send his models down the runway wearing white dreadlocks in 2017. The move was deemed cultural appropriation.

Jacob responded to the controversy by saying he “does not see color.”

“[To] all who cry ‘cultural appropriation’ or whatever nonsense about any race or skin color wearing their hair in any particular style or manner – funny how you don’t criticize women of color for straightening their hair,” he added.

Ford, who has styled celebrities like Beyoncé, Anne Hathaway, Daniel Craig, Johnny Depp, and Ryan Gosling, has previously spoken out against the media’s double standard regarding nudity.

According to The Independent, “Ford has previously been criticised for objectifying women in his fashion and fragrance campaigns, which regularly feature nude women. He also featured a full-frontal male nude model in the ad campaign for his 2002 YSL men’s fragrance, which was banned in the UK.”

“The thing is, you can’t show male nudity in our culture in the way you can show female nudity,” Ford told The Guardian in 2015. “We’re very comfortable as a culture exploiting women, but not men. But I don’t think of it as exploitation [either way].” 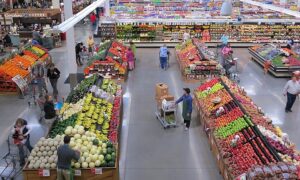