Despite the restrictions, Mayor Bill de Blasio said, 'Everyone come on down.'

Mayor Bill de Blasio announced that crowds can return to Times Square for the annual televised New Year’s Eve Celebration but there is a catch.

Everyone in attendance must show a valid photo I.D and proof that they are fully vaccinated. The regulation applies to anyone who is eligible for the vaccine, ages 5 and up. Anyone who cannot get vaccinated due to a disability has the option of presenting a negative PCR test taken within 72 hours of the event. Children younger than 5 can attend the event without being vaccinated as long as they are accompanied by an adult who has been jabbed.

The approved unvaccinated attendees will have to wear a mask. The required documentation will be checked by NYPD and other officers at security points surrounding the area.

“Everyone come on down,” de Blasio said in his announcement. “We are proud to announce the ball drop, everything, coming back full strength, hundreds of people there to celebrate. We can finally get back together again. It’s going to be amazing. Join the crowd, join the joy, join a historic moment as New York City provides further evidence to the world that we are 100% back.”

The city was considered an epicenter of the COVID-19 pandemic during 2020. Currently, New York Health reports that the number of people who tested positive each day has declined to 1.9%. The organization reports that 962 people had a probable or confirmed case in the last 28 days.

Roughly 68% of New York City residents have been vaccinated. Another 6% are partially vaccinated while an estimated 25% are unvaccinated.

“Tuesday’s announcement comes a day after the mayor hinted at a ‘large, wonderful celebration’ to bring in 2022 after the Crossroads of the World featured eerily empty streets but for a small group of frontline workers as a ton of confetti rained down last year,” writes NBC New York. “Last year, revelers were told point-blank ‘Don’t come’ to Times Square to celebrate but much has changed since then. More change is likely still to come.”

The Centers for Disease Control and Prevention still discourage large gatherings, which the organization defines as “bring[ing] together many people from multiple households in a private or public space.”

“Gathering virtually or with the people you live with is the safest choice,” says the CDC. The agency did note: “If you do gather with people who don’t live with you, gatherings and activities held outdoors are safer than indoor gatherings.” 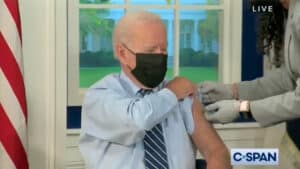