Cynthia Millen was a USA Swimming official for three decades before stepping down earlier this month to protest a trans swimmer being allowed to compete against biological women.

Millen believes that biological males competing against biological women is going to destroy the sport.

The subject has become a fiercely debated issue after Lia Thomas, a trans swimmer at the University of Pennsylvania, broke women’s swimming records.

Thomas had previously swam two seasons on the men’s team, where their swimming was less remarkable.

“It’s horrible,” Millen said during the interview. “The statement for women then is you do not matter, what you do is not important, and little girls are going to be thrown under the bus by all of this.”

Praise to #cynthiaMillen for resigning in disgust.

No woman should ever get in the pool with #liaThomas — then, it ends. pic.twitter.com/iv5BuuMCak

Currently, biological men are allowed to compete on women’s teams after one year of “testosterone suppression treatment.”

Millen does not believe that those rules are enough, telling Fox News, “while Lia Thomas is a child of God, he is a biological male who is competing against women. No matter how much testosterone suppression drugs he takes, he will always be a biological male and have this advantage.”

Millen resigned on December 17, telling them that she could not support the destruction of the sport, according to a report from the  Washington Examiner.

“I told my fellow officials that I can no longer participate in a sport which allows biological men to compete against women. Everything fair about swimming is being destroyed,” Millen told the outlet. 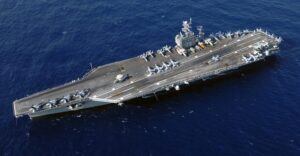 U.S. Warship Ordered to Stay in the Mediterranean Due to Russia-Ukraine Tension